I am a Studio Cat 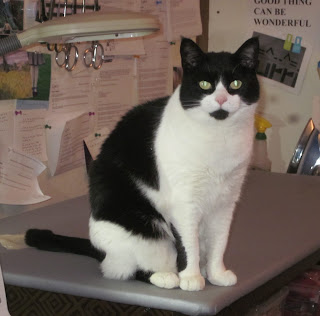 I guard Mom's studio. I make sure all fabric is covered with my furs. I keep an eye on her tools.  I make sure everything is in order. I inspect her work. I am the head of  Quality Assurance. When any quilt leaves this room complete, it does so with my paw of approval.

I Am a Lap Cat

No fooling. Mom sits down. I get in her lap.

If I want to get in Mom's lap and she's NOT sitting down, I meow. Eventually (she is a human, after all, it takes a while) she figures it out and sits down so I can get in her lap. 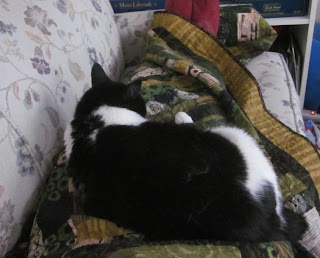 
Wait a minute, that means she's going back to day hunting and I won't be able to nap in her lap all day.


Mom is still home sick. (She's pretty bummed about it too)

Maybe Spitty-the-Kitty is right. Maybe Mom does have a bug inside her tummy. 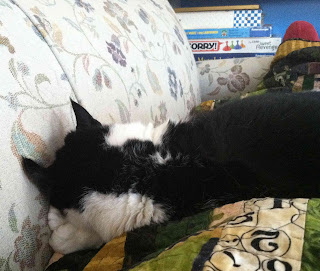 (Mom's home sick again today, but she's feeling better. Thanks for the purrs!)
Posted by Millie at 12:07 PM 10 comments:

Mom's home sick again today, but she isn't quite so miserable.  Last night she hacked up a hairball. I didn't know beans could hack up hairballs. It was not a pretty sight.  She said she felt much better afterwards, and after watching that, I can believe it!

She went to bed and slept late.  Today she got up and actually ate something, so I am sure she is feeling better, because she didn't eat -anything- all day yesterday. 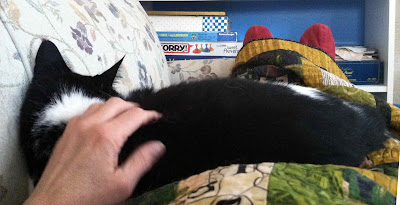 As you can see I am doing my bit to help Mom feel better. I am lying on her lap, purring.  You can see Mom's hand giving me scritches, and you can see her feet in red slippers.  Proof positive I am on her lap. Yup, Mom is feeling better.

Oh boy, is Mom miserable today. She got up early and made a beeline for the human litterbox room.  I can't remember if I have ever seen Mom so sick. I could tell she was feeling awful. I couldn't watch, but I didn't want to leave her alone.

She's sacked out on the couch today, and I'm keeping an eye on her. She tells me she'll be fine after a day of rest, and that I shouldn't worry..

Mom was taming the paper tiger on her desk on Saturday, but we got invaded by these guys

who stayed to watch a movie. (That's PlusOne on the left, and Mr Karate on the right). Mom had to make THREE batches of popcorn with Parmesan cheese for them to eat.

I hid in my tent.

Today Mom finished with the paper tiger, paid all the Mr Bills and now we are watching my pals, the guys named Pat. 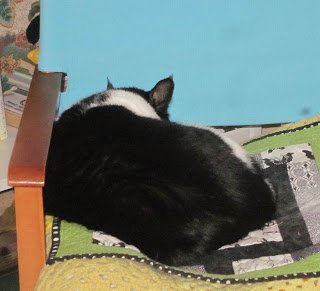 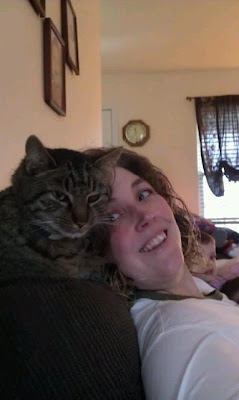 My sweetie, Monty, and three of my favorite beans.
Posted by Millie at 6:58 AM 5 comments: 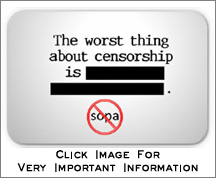 
It's important that we are able to say what we think. I may be an itty bitty kitty but I have opinions.
(Click the link, clicking the photo won't work.)
Posted by Millie at 6:56 AM 7 comments: 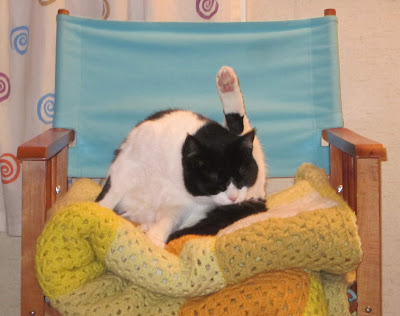 When Mom got home last night, I got my stinky goodness and then joined her on the couch while we watched the Australian Open Tennis. When I had had enough, I scampered away, and Mom went into the sewing studio to do some stuff.

When Mom went to bed, I followed along, and slept right next to her all night. 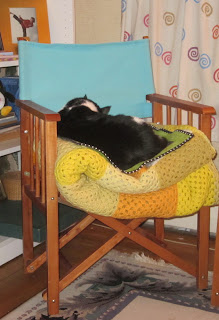 Yes Mom, I am ignoring you.  You went to the quilt shop TWICE this past weekend when you could have been lying on the couch with me next to you.

Yes but Millie, both times when I got back I -did- lie on the couch yet you stayed where you were.

Have I told you all lately how much I love my friends, the guys named Pat? It was so much fun watching them play Teebow's Broncos.  I'm sure Mr Cabinetmaker wasn't enjoying it so much.  (Mr Cabinetmaker is Mom's brother who lives in Colorado.)

You know that Mom's on a roll when I don't post on a Saturday. It means Mom got up early, went food hunting, and then did all her errands.  Yesterday was no different.  While Mom was doing that. I was doing this. 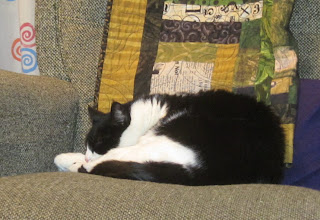 I have lots of nifty quilts on which to nap. (It's one of the benefits of living with Mom.) 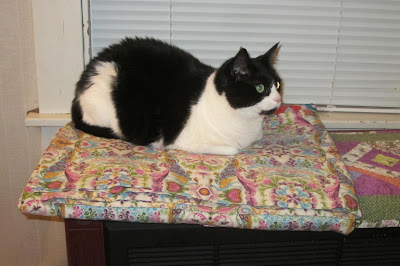 I'm a lucky girlcat to be formerly feral. We got snow yesterday, and then a little drizzle of rain, so it's icy and cold outside.

I'm inside where it's warm and I have a lot of places to get comfy and watch the world go by outside.

Mom's had her nose stuck in the Kindle all week, reading A Town Like Alice. Now she says she wants to get into the sewing studio and start making a mess. I think it's going to be a good weekend.
Posted by Millie at 7:38 AM 13 comments:

In yesterday's post, I was lying one of our quilts. 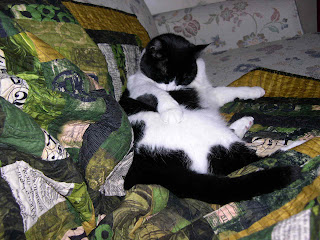 In the comments, Scooby, Shaggy and Scout said it was a Gizzy Quilt, but it's not. It's a Julie quilt. About a year or so ago Mom and her friend Julie swapped quilts.  Mom got this quilt, called Obsolescence ("O" for short.)

As you can see, Mom and I both love it.

(Mom doesn't make the Gizzy quilts any more.)
Posted by Millie at 7:44 AM 7 comments: 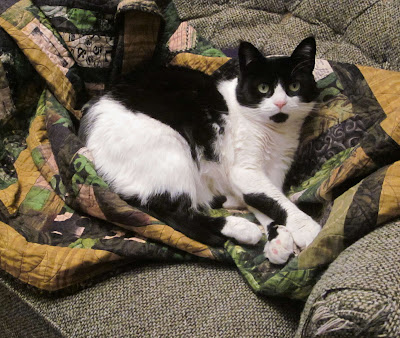 Where did Mom find me napping on Sunday? 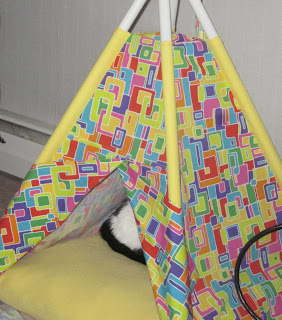 In my nifty cat tent with the puffy fleece pillow inside.

Why is this a surprise? Because I haven't gotten close to the thing in a year, and then all of a sudden Mom finds me napping inside. 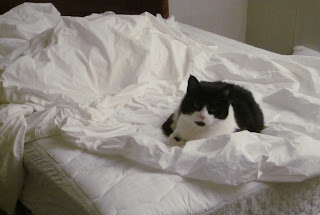 So where was I hiding out on Saturday? I am very sneaky, I spent a little time hiding out in each spot.  A little while here, a little while there.. so that no matter where Mom looked, I was someplace else.  If Mom is busy, she never even notices I'm hiding.

Of course, no cat can resist laundry fresh out of the dryer, and I'm no exception.  After Mom dumped the sheets on the bed, she took the basket away for more.  A little while later, I moved from under the bed to on top of it.

Wait until you see where I hid on Sunday!
Posted by Millie at 12:30 AM 9 comments:

I've been napping the day away.

Where? I'm not telling.

Maybe it was under the bed, maybe it was in the sewing room, maybe it was on my special pillow in the computer room. Mom couldn't find me all day (so there are no pictures.) 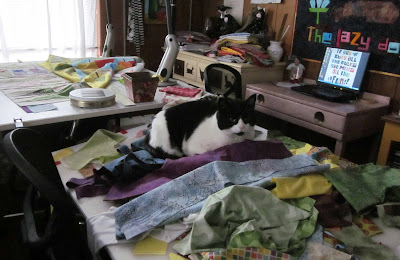 I have lots and lots of cool places to nap. Right on one of Mom's sewing tables covered with fabric is always a top spot! 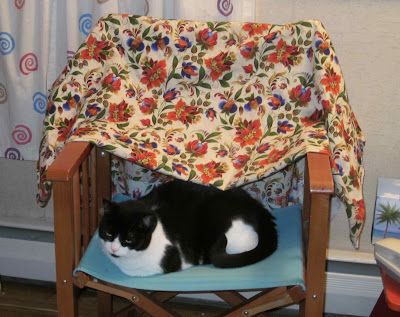 Under some of her fabric is good too.
Posted by Millie at 7:25 AM 8 comments: 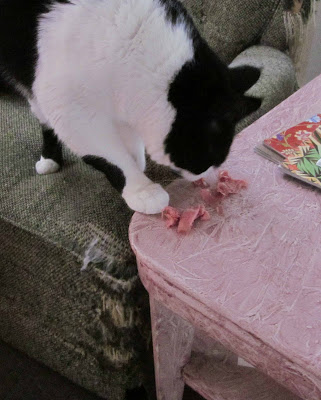 Oh, how I love beef.  Especially when it is nice and rare and juicy like this bit. Mom put this down for me and I scarfed it right up. It was so good.  I love beef.
Posted by Millie at 7:36 AM 8 comments: 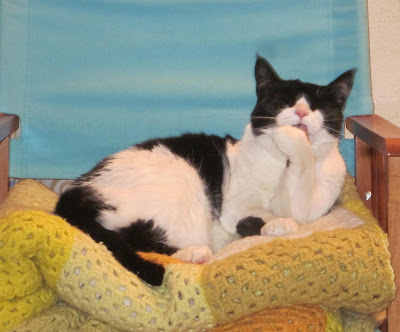 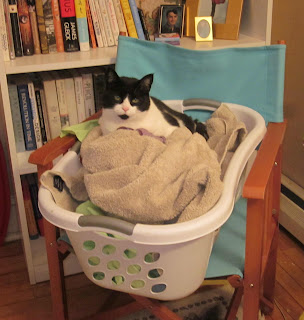 It's Tuesday. I'm in the laundry basket with fresh laundry.  Where else would I be?

Mom's going back to her day hunting gig today.  During the three days she had off she hardly rested a minute. Mom washed both my litter boxes and replaced the pads and the pellets and even dragged the rug sucking monster all over the house. The Christymas tree has been Freecycled, and the house is back to "normal."

Mom's not usually a johnny-come-lately to much of anything. Usually she's on top of just about everything. But she missed the bus the first time Masterpiece showed Downton Abbey, so she's been doing a bit of catching up.  She'd watched bits from each episode, but not the whole thing from start to finish.

We took care of that yesterday, watching all four episodes - the first three on the internets, and the last one on the picture box. Six hours, wow.  Yes, I napped next to Mom, and sometimes on her lap while we watched.

We took a break to watch my friends, the guys named Pat, romp around with the poor Bills from Buffalo.

The Christymas tree is down. Mom took it all apart, and put it in its great big box.  Mom says it is going going gone, and that next year we'll have a smaller tree. She's hoping somebody from Freecycle will want it and take it away. I'm going to miss that tree and the great big box, but Mom says it will work out, and she promises me we will have a Christymas tree next year, so I'm not worried.

Oh, and Mom has -finally- taken some pictures of me, so my posts will have photographic evidence of my recent exploits!
Posted by Millie at 12:30 AM 7 comments:

Happy New Year to all my friends, furry and otherwise!

Mom and I have been hanging out, watching tv and napping. Mom's been reading and doing a little cooking.  She made herself a roast beef  sandwich for lunch today and gave me some nice rare beef!  It was SO good!

Then later, she had some pulled pork for dinner. Mom said she made it herself, but I didn't see her pulling any pigs so I'm not buying it.  But she gave me some pork, and oh my Bast, that was good too!

Mom worked so late hunting the year end last night that by the time she got home it was almost today.  So we didn't stay up to greet the New Year in purrson.

(Besides, I can't stand Kat-thy Griffin, although Anderson Cooper is pretty cute!)