Today is leap year, and I hear it's a day that girls can ask boys out. (I assume this means that girlCATS can ask their boyfriendCATS out on a date, so here goes...)

Dear Monty Q, would you like to come over and spend the day with me?

I am looking forward to seeing you.

Labels: Monty Q, Monty Q I miss you come on over

I guess I owe my Mom an apology. Look what she did for me. 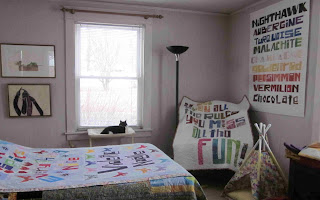 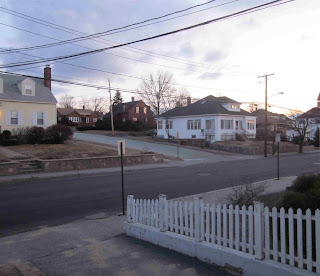 Since 2008, we have had an (almost) yearly contest to guess when the snow will melt outside my house. It was called the When When Contest, and kitties had to guess the day the snow was gone. It was great fun.

Well furry friends, this picture was taken just this morning (February 28), and as you can see, there is no snow. No snow, no contest.

I'm kinda bummed. One one paw, I love the contest, but on the other paw, Mom hates moving the snow around.  Oh well.
Posted by Millie at 7:29 AM 8 comments:

I Am a Timeless Cat 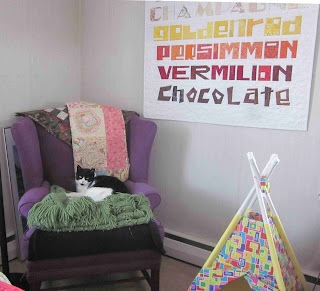 However, Mom said it was "Time."

I don't know what time had to do with her taking the quilt off the chair, where it was the most perfect tent, and hanging it up on the wall, where it isn't any use to anybody.

Way back when, I wrote about Oscar, a cat who lived in a nursing home and would sleep on a patient's bed before they crossed over to the Rainbow Bridge. Then I told you about Homer, a blind cat who saved his Mom from being attacked.

Today I am going to tell you about Pudding, a 21 pound shelter cat who saved his owner's life just hours after he was adopted.

Pudding is a really laid back cat, and aside from being really really big, there isn't anything noticeably special about him. Except that he woke up his new owner in the middle of the night because she was having a diabetic seizure in her sleep. She was able to call to her son, who got help.  You really have to go read about Pudding. His story is making headlines. Mom saw it on Google!

Non-cat owners think we are selfish self-centered animals. Appearances can be deceiving. We are wonderful, and devoted family members. Just last night I lay on Mom's lap as she was watching Project Runway All-Stars and later slept next to her in bed.

How wonderful are YOU to your beans?

I Am A Thinking Cat 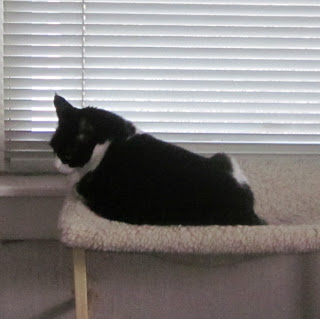 I think about how lucky I am to have a terrific Mom who figured out how to make me happy and be patient while I learned to be comfortable around peoples.  Mom didn't need anybody like Jackson Galaxy to tell her how to act around me, and how to make me feel good. Jackson Galaxy is that guy from My Cat From Hell on Animal Planet. Mom and I watch the show together, and WOW! I knew it before, but lots of peoples are really stupid when it comes to how to live with a cat.

I think this Jackson guy is pretty cool, even if he does look a little weird.

OK, that's enough thinking for one day. I'm gonna go take a nap.
Posted by Millie at 7:57 AM 4 comments:

I Am A Diplomat?

Megan said I am a diplomat after saying yesterday that you have to love your family members even if they are woofies.

I kinda thought I was just being a realist.

Mom has left the quilt on the big wing chair, and I have been spending my days napping there.
Posted by Millie at 7:48 AM 6 comments:

I Am a Family Cat

I have a couple of fur-cousins who are woofies. They are part of my family.  Families come in all shapes and sizes and you have to love your family members, even if they are woofies. 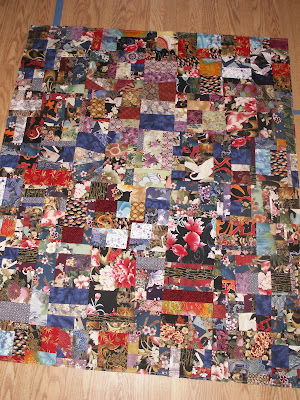 Roxy and Lucky own PlusOne and his Mom and Dad (Auntie Karate & Mr Big.). They are selling raffle tickets to this Asian-themed lap robe to raise money for PlusOne to go to France, Italy and Greece this summer and play music as part of the People to People Student Ambassador Trip.

PlusOne has always been very good to me. He never tries to grab me and he is always very patient with me. I let him pet me, and I like to play with him. He is a good almost grown up sticky bean and I want him to be able to go to Europe and see the world.

Thank you.
your friend,
Millie
Posted by Millie at 12:30 AM 4 comments:

I Can Be a Silly Cat 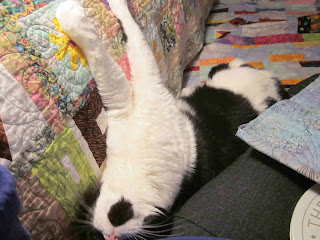 Sometimes I can be silly, especially when Mom wants me to do something else.  Here I am stretching while Mom sews on one of her quilts.

I Am an Undercover Cat 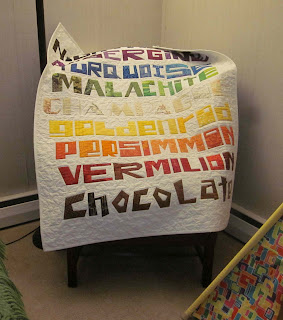 Mom took this quilt off the wall to show one of her friends.  Then she put it on top of the chair because she didn't want me to lie on top of it. 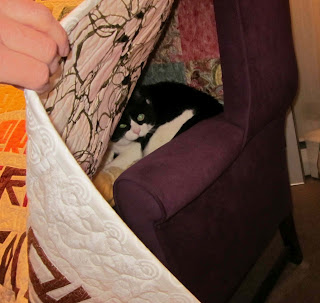 She needn't have worried. I like being UNDER it much better.

I Am an Acrobatic Cat 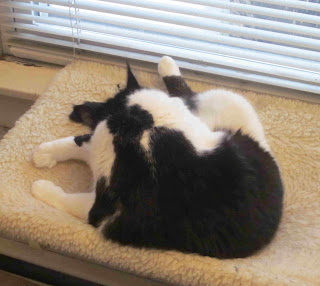 Mom says I look like an abstract painting. I think she's crazy. I am simply an Acrobatic Cat.

I know I am not the only one! Are you an acrobatic cat too?
Posted by Millie at 7:45 AM 10 comments:

I Am a 'Fraidy Cat

Yep. Sometimes I am a 'fraidy cat. 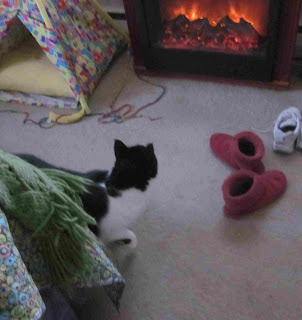 I do not like this thing. Mom says it makes the Hots. I think it's funny looking, funny sounding, and I do not like things blowing air on me. When Mom turns this thing on (in the mornings when she gets dressed, I run away.
Posted by Millie at 7:34 AM 12 comments:

I Am an Important Cat 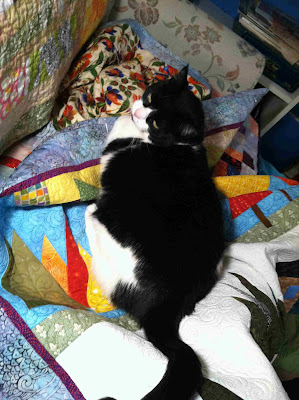 It is Important that I lie on top of Mom's new quilt as she sews the binding on.

Even if the quilt is on her lap.

Even if she can't move it without disturbing me.

I am getting ready for a date with my Valentine. 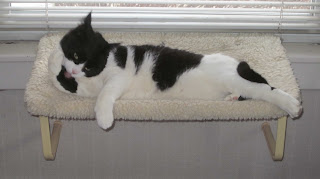 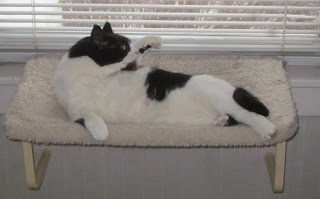 Hey Mom, don't you have someplace to go? 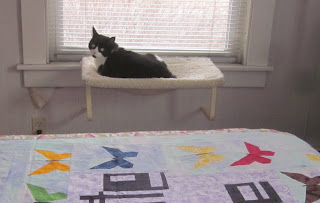 I Am A Tolerant Cat 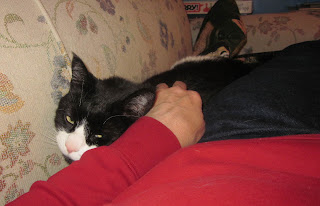 I mean really, do you see the tiny space I have to squeeze myself into here to get scritches from Mom? If that's not being tolerant, I don't know what is.
Posted by Millie at 6:58 AM 10 comments:

I Am An Independent Cat 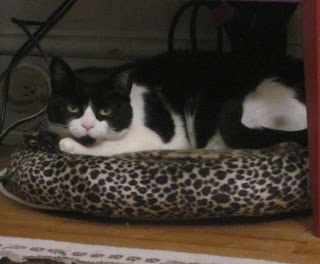 I am an independent cat. I nap where I want, when I want.  If I don't want to be in Mom's lap, I nap someplace else. Like in this cat cup Monty's MomBean made for me.
Posted by Millie at 9:19 AM 6 comments:

I Am A Wishful Cat 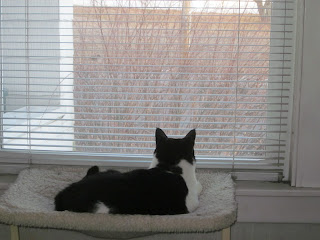 I am a wishful cat. I wish I could go outside and chase those birdies. I know I could catch them.
Posted by Millie at 7:45 AM 10 comments:

I Am A Helpful Cat

Dear Friends, Mom bought the cat fabric at eQuilter.  She says "The Dignified Cat" is here, and the "Backyard Stripe" is here, both part of the Garden Frolic line by Debra Grogan for RJR fabrics. 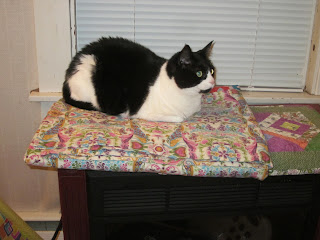 I like being helpful. Mom certainly needs it from time to time. I help her know what time it is by meowing for my breakfast at breakfast time, dinner at dinnertime and treats at treat time. I tell her when it is time for playtime.  I remind her when it is time to sit so she can relax and give me my scritches.  I help keep her in shape by whapping small items from the table to the floor, so she gets her stretching exercises in. I also chase the crickets that come into the house.  I leave the pieces around so she knows I have been successful.

I bet I'm not the only helpful cat around.

I Am An Artful Cat 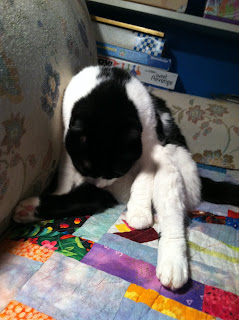 Mom is inspired by my beautiful black and white furs. 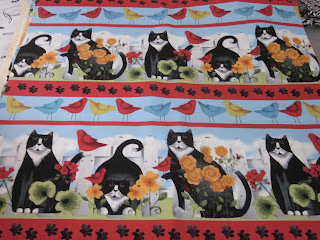 Apparently other artists are inspired as well, because look at the fabric my Mom found! It isn't a perfect likeness of me, but it's quite close. 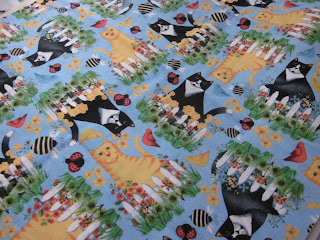 And LOOKIT!  This one even has my dearest Monty Q in it as well!

I Am A Sad Cat 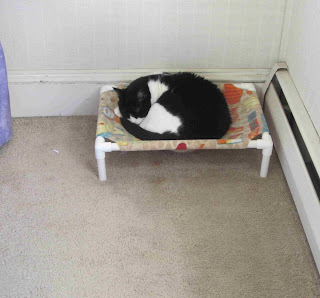 I am sad today.

I Am A Sports Fan Cat 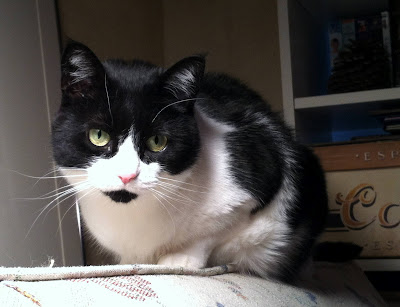 I am a Sports Fan.

I watch the Tennis with Mom, and sometimes Golf, but best of all, I love my pals, The Guys Named Pat. They are playing in a very big game today, and I sure do hope they win it. None of us fans expected they could make it to the Super Bowl this year, and we are very proud of them.  I know lots of beans don't like the guys named Pat, and frankly, I don't want to hear it.  They are my team.

I Am A Couch Cat 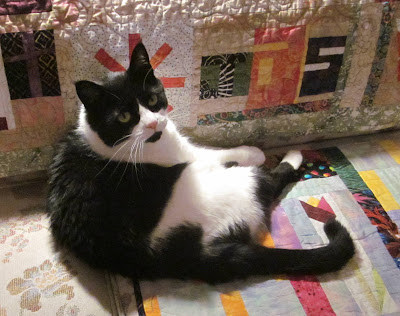 I Am A Watchful Cat 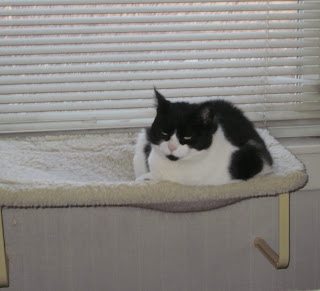 I Am A Hungry Cat 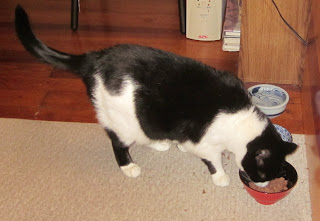 At least twice a day anyway.

I Am a Sleeping Cat (Wordless Wednesday) 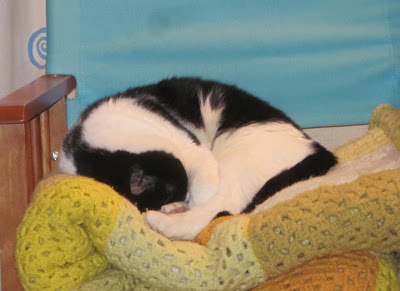