The Sixth When When Contest is ON!! - Entry Deadline Extended!

I am happy to announce the Sixth When When Contest will is ON for 2015. 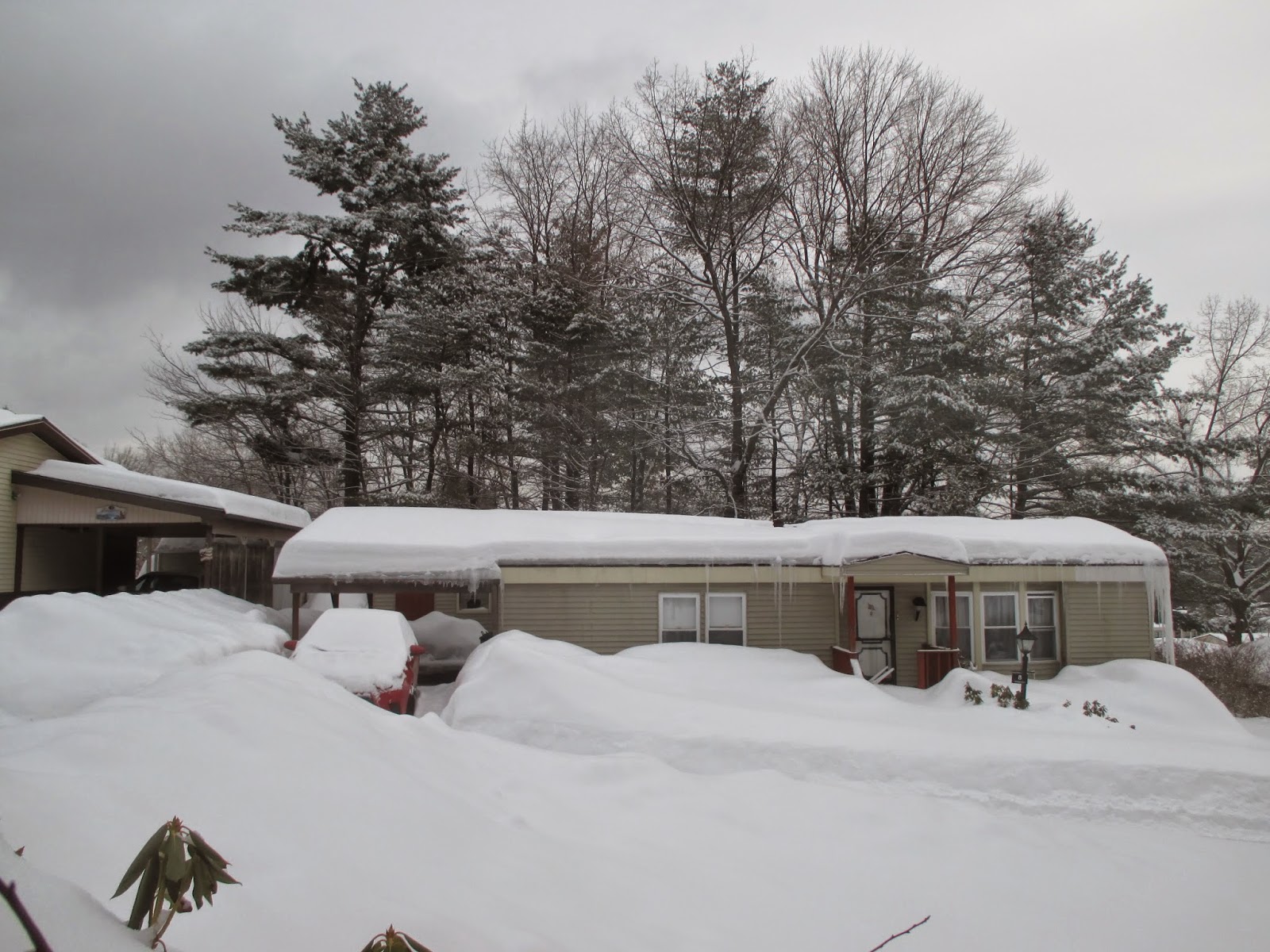 This is the view outside the front of our new house in the town of ----, about four miles away from our other place. We had two full winter's worth of snow in just over a month. The piles of snow on either side of our driveway are both taller than Mom (60").  We have more snow on the ground now than we have ever had in any previous When When Contest.

Would you like to guess? I am having a contest. The cat, woofie or bun who guesses the date when there is NO MORE SNOW when Mom looks out this window will get a prize. The prize will be treats, and bragging rights! (Occasionally evil little chocolates have been known to appear in prize packages, but Mom is making no promises.)

Every morning Mom will get up and take a picture of this same view and post it on my blog. On the day she wakes up and THERE IS NO SNOW ANYWHERE IN THE PICTURE will be THE DAY. If you guess the EXACT day, you will get a prize. If NOBODY guesses the EXACT DAY, the cat who guessed the day CLOSEST TO the day, but not AFTER the day, will get the prize.


Here are the rules:
1. Each cat, woofie or bun gets ONE GUESS EACH. (Our friend Megan from Sydney Australia can enter even if she isn't a cat, but she's the only hooman who is eligible.)
2. Guesses must be in the comments of THIS POST.
3. Deadline is Midnight  Wednesday March 4 Friday March 6, 2015. (So when it isn't Friday anywhere in the world, the voting will be over.)
4. You have to have a blog, or leave some way for us to get in touch with you, so we have to know who you are. If you have a blog, you're good to go. (We don't do Facebook.)
5. You can enter no matter where you live. Australia, the United Kingdom, New Zealand, Canada... all are welcome to enter.
6. It's my blog, so if I wanna change the rules, I can.


Now for some useful information.
1. We face true East. South is to the right.
2. Sun melts the snow.
3. Rain melts it faster.
4. The average high temperature for March in New Hampster is 44F
5. The average low temperature for March in New Hampster is 18F
6. Winter isn't over, either. We have had big snowstorms at the end of February, and in March. It snows in April, too. So, guess accordingly.
7. *****The contest ends when there is NO SNOW on the ground in the picture. If it snows the next day, oh well, that's New England weather for you!*****
8. When the contest is closed, Mom will post a big list of all the entries and dates in my sidebar, so everybody will know who guessed what date. It is your responsibility to check that your name is there, and that your guess is correct. It's usually a big list, and adding the names gets complicated, so if your name is missing, let me know right away.

So put on your thinking caps, leave a guesstimate, spread the news, tell your furriends, and check back every day to see if you are the winner!

**updated March 7, 2015: The deadline to enter the contest has passed. Entries are now closed.

Labels: when when, when when is on

I'm the first guesser. I guess May 1.

I'm not a cat either (I am Megan's mother )
BUT if I could have a vote I would say May16th.

I do think all that snow will last way longer than normal - but I also bet you will get lots of rain this spring. So I'm guessing April 26.

Hello ladies. We are going to guess
April 25.

I was going to guess April 20th like I usually do, but since Babby58 already guessed that I will go with April 24th.

April 30th. I'm Jack and I'm a woofie. We don't have a blog but your mom answered my mom awhile back from her cooking blog so I think you can find us. Woof!

April 21. We haven't guessed correctly all the other years, so who knows.

Mom is casting votes for us cats in Oregon. Sasha picks April 14th & Cosmo is really optimistic with April 2nd.

Our crowd doesn't do well with this, either, but we're voting April 8th. When it starts to melt, it usually goes pretty quick!! Thanks from Bogart, Gracie, Ron, Patrick and Watson.... in Iowa with much less snow!

Calypso the white lab and her mom Dee are voting for April 8. stubbywinteratgmaildotcom

Kikky sez April 15, so there will be one good thing about that day.

It is tough to guess this year since we have nothing to gauge it against!

My little bundle of joy is my kitty Smudge and she thinks its going to be April 15th.

We don't have a blog but you can contact us on twinklez1985@googlemail.com

Alasandra, The Cats and Dogs said...

Since it seems like winter is going to last forever we will guess March 31.

Wow dat's a lot of snow. Weez a little confused by how da entwy purrocess goes, so me Dezi will say dat it will all be gone May 5ff. And I Lexi will say minez Meowday April 29ff is da day it'll awl beez gawn.

I am going to guess April 16th.

My black cat Ifi says it's going to be May 2th.
We don't have a blog so please contact su on fefevilla84@gmail.com

da tabbies o trout towne said...
This comment has been removed by the author.
4:28 PM

Hi Millie! What a pretty kitty you are! I came over from a link sent by Zoolarty!
So here I sit in NC! We still have snow on our ground from last Thursady...and we even had a 50 degree day over the weekend. and our temps are not as cold as NH!
Soooooo my guess on when your snow is all gone is
April 27th...because that is my dad's birthday!
Hugs
Madi

Hi, Millie!
Mine guess is May 5.
Your furriend,
Toffee

this is tough. so many good dates are taken.
kintaro says may 7
tt says march 23 (daddy's birthday)
kippie says april 10

Samantha says her guess is March 23!

We haven't done this in a couple of years, so we are excited to join this year. We are going to guess April 13.

Chloe and LadyBug guess May 8th!

Millie, we think you might have a smidge more snow than us here in WNY but it's pretty close this year.

Yay...It's time for our favorite contest of all year! We're sorry you have so much snow, but we LOVE your When-When Contest! We love your new kitty condo and want our Mommy to get us one! Stay warm, Millie!

Oh dear, we'd go for not until next year (like 2016!) but that's purrably not acceptable so guess we will pick a May day ... like as in May 30. Don't think anyone else picked that. But of course we hope you still don't have snow then, but with so much snow ... who knows!
Yeah, May 30 ... might still be a pile or two here or there!

We've clubbed together and would love to go for 10th May which we don't think anyone else has gone for. Its a lot of snow though and we are thinking you might need some red cross parcels if it doesn't clear soon.