She made two dozen Red Velvet Cupcakes. She made them at home, in her own kitchen. She's nuts. She brought them to her day-hunting gig. She even turned on the air-colditining in her metal masheen for the trip. She had to. It was so hot the frosting was melting! 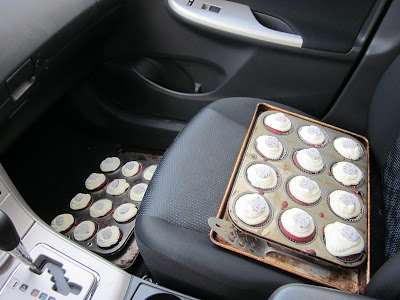 Eight-thirty in the morning, and they were already half gone. 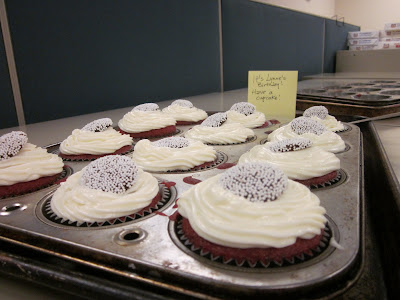 Later in the day, it got really, really hot. 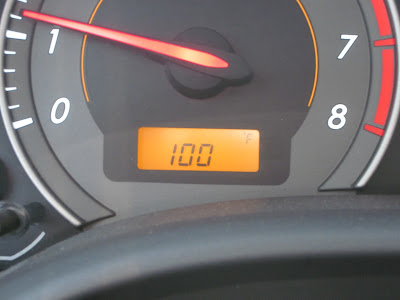 100 is a Really Big Deal here in New Hampster. We didn't only have the Hots, we had the Stickies. Yuck! Mom says it's so hot she might even leave the air colditioner on all day for ME!

Labels: family, it's so hot, lucky me

THose cupcakes look especially yummy the way your Mom did the frosting. YUM!
I hope it gets cooler for you and her!! I think we will get 100 here today too.

100 degrees F is not much fun at all Millie, especially if it comes with high humidity. I hope you don't suffer too much.

We had that all week and it's cooler now. It's funny when 80 with low humidity all of a sudden feels cold because you've had 100 with tropical dew points and a 115 heat index. No kidding.....mom felt chilly yesterday!

That is way to hot for your part og the country!

Happy Birthday to your mom! Those cupcakes are really pretty! What a great mom you haf that will leave the AC on. We haf to haf it all the time in Oklahoma. Stay cool, Millie! xoxo

Loved the cakes, Millie - but not the heat. Perhaps tomorrow will be cooler.

The cupcakes look great. But mostly, we hope Mom left the A/C on for you. 100 is brutal anywhere!

Those cupcakes look delicious!! It has been hot here in Indiana too :( Thank goodness for a/c!!

Yes in your fur coat you need the AC on all day!