It's Hot. Not as hot as yesterday, but still Hot. I'm hiding out in the air-colditioned bedroom.

Mom, on the other hand, has been out and about. Mr Karate took her out for her birthday on Saturday. She asked him to bring her places were it was INSIDE, COOL, and there wasn't too much walking.

So where did he bring her? First he brought her to eat real live dead raw fish. (I don't like fish.)

Then he brought her to buy some of her favorite Evil, Evil Little Chocolates.

Next, he brought her here. 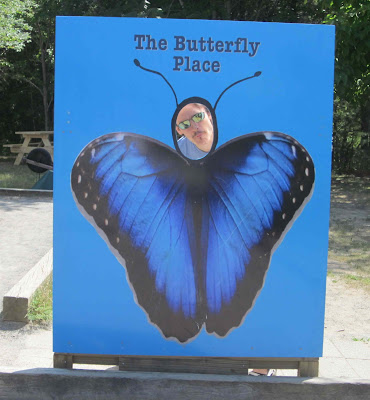 To the Butterfly Place, (which has no air-colditioning) 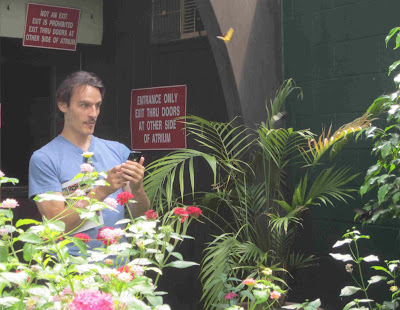 Mom and Mr Karate watched yukky BUGS flying around for a couple of hours! 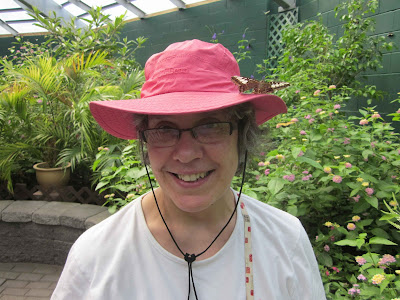 One big one even landed on Mom's HAT. I'm telling you, I would have CAUGHT that big bug and he wouldn't have ever done THAT again!

After THAT, they drove to some place called 900 Degrees (sound HOT to me) where they had Martinis, Pizza and other stuff.

Then they went to see the very last Harry Potter movie, the one where Harry finally kills You-Know-Who.

Sounds like a good time to us, too! But we don't think the 900 degree place sounds like fun, either. Stay cool,Millie! xoxo

Sounds like a full day of birthdaying. Hopefully Mom did get lots of cool overall. YOu "chill out" today, ok?

Butterflies are lots of fun! We hope your mom was able to keep cool even in that 900 degrees place.

What a fun time!! Tell your mommy that we love butterflies :)

Hope you all stay cool!

Hugs and snuggles from
Darcy, Gabriel, Ramiel and their mommy

It sounds like your human had a GREAT day!! Way better than my human's birthday - she says she never wants to see Council Bluffs, IA ever again! She feels bad, too, because it's not her boyfriend's fault his band had to play in such a middle-of-nowhere-with-no-champagne-by-the-glass place. They are both home now, so she is much happier.

P.S. She is really, really tempted to order a chocolate-dipped bottle of champagne from Van Otis!

Sounds like Mr Karate really helped your mom have a fabulous birthday. What did you contribute Millie - a hug? a kiss? anything?

We are sure the movie theater was air conditioned.

That was a wonderful way to spend her Birthday