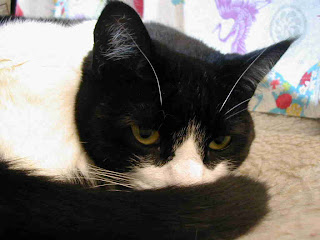 Mom has been chasing me around with her little digital camera. I don't like it when it flashes in my face. So I make sure to keep an eye on her when she's got it out. She tries to pretend she isn't going to take my picture, but I'm no dummy. I watch the little red light flash just before she clicks the button. That's why she hardly ever gets pictures of my with my eyes closed.

Mom's got all kinds of excitement going on at her day hunting gig. She's been rambling about Naz and San; she's gonna put her servants through the rack, and getting another Tee-one and moving some guy named Data. She's talking about Mozy-ing Ward and June. (?) She's been going on about a couple of Cats, Five-Eee and Six. (She better not be thinking about bringing home another cat. I like being Top Cat). She's going to trade in a couple of old Yoop-ee-esses for a new one, and getting a Lec-trician to install a special plug. And there's something about a servant named Jack that doesn't know anything.

Listening to her rant and rave makes me SO glad I am a cat.
Posted by Millie at 12:01 AM

hahahaI asked my Momma for help with this one but she did not know either.. ok Momma must be more cat than human :P hehe

Make sure though, with all your Mommas bussiness that she does not pop a valve! :)

Wow your mum sure knows lots about puters and has a busy day ahead of her. You better make sure you has a drink ready for when she gets home.

Millie - what language is that that your Mommy speaks???

Sounds like your mommy is a netwerk administrater.
Our mommy does tech support, but she goes to school at night to be a programmir.

Yep - our mom talks like that too. We don't get it & usually just ignore her.

This is one of those things that HeBean would understand, right?

(Look, you didn't hear it from me, but I overheard the beans talking about a trip upstate at the end of the year.)

Heh, sounds like your mum has some computer issues. My mum is the teacher in charge of ICT at her school and everyone complains to her when the computers don't work. Today 2 almost new overhead projectors broke down on the same day, one in her own classroom, it was a very trying day! She was in need of some lapsitting and purring by the time she got home to me.

Ward and June? Does your mom work with the Cleavers? Does she know Wally and the Beaver?

Could that possibly be a servant that doesn't know jack? I think your momma she no speaka de engleesh and is spouting ze marshan langwich and needs to learn ze langwich what means Stinky Goodness and pets. Oh, and resting and watching the guys named Pat and stuff like dat!

my mom does that with the camera falshy thing - so I try to hide my eyes!