There's still snow on the ground. 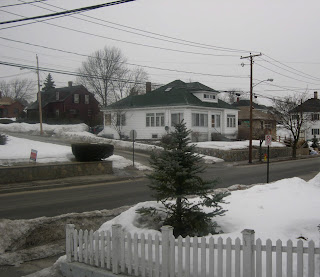 The weatherman says we are supposed to see the sun today, but it doesn't look like it to me. We are supposed to get rain all weekend. Two inches. Doesn't sound like much, but the ground is still frozen here, so the water won't have anywhere to go, so there are warnings for "surface flooding" out. You can click the picture to biggify to see where the snow has melted, and to compare the pictures to previous days' pics. 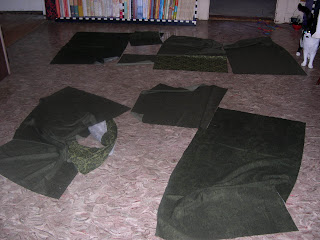 She went to the store to buy fabric for the back of the quilt with the "Slashed Squares." She needed 8 yards, but the store didn't have enough of the one she wanted. So she got all they had - 4 yards, and then bought 4 yards of another fabric that was really close in color and tone. She brought it home and gave it to the washing monster. Later, lying in bed, she was trying to figure out how to put the fabrics together so the back of the quilt wouldn't look stupid. Suddenly an idea popped into her head, and BAM! Next thing I know she's up, running around in her nightgown at midnight, rummaging through her fabric boxes.

During breakfast she was scribbling on a piece of paper with a calculator nearby. Sheesh! You wouldn't think you had to be a math genius to make a quilt, but I guess you do, sorta. Anyway, she came home from her day hunting gig and started measuring and cutting. I helped, too, as you can see. I love running across the dining room floor when there isn't any furniture in the middle of the room. I can get going REALLY FAST, and the fabrics make a good slide.

I wouldn't get to have this kind of fun if I was still a feral kitty.

After a few hours, she took a picture. She isn't finished, and this is the FIRST time ever she has worked on the BACK of a quilt before she even finished the FRONT.

Does this look familiar? 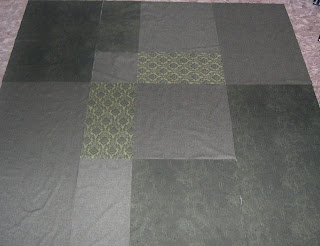 Can you see where she got the idea? 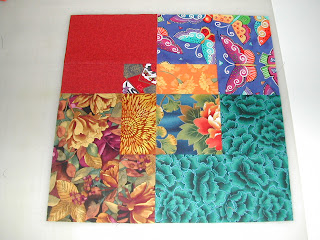 To give you an idea of what she calls the "scale" This colorful block is 14" square. The giant one on the floor is 84" square. And she says it's gonna grow. Mimmay wants it, but Mom says it already has a home.
Posted by Millie at 12:04 AM

Labels: formerly feral, sewing, when when?

That looks like a really neat back for the quilt. Mom says she really likes the colors. She wants to know if they are a sage green color or a grey color.

The colors are actually a dark green, almost a khaki color, but you are right, it is a greyish green.

You know she couldn't make gizzies without you!

The sliding sounds like fun!
Oh, and we are getting the snowstorm of the decade here. Isn't that just wonderful??????????

Parker, that is TERRIBLE!

We will be getting about 2 inches of RAIN this weekend, and there are "surface flooding" watches out because the ground is still frozen.

Speaking of which...
*****The contest ends when there is NO SNOW on the ground in the picture. If it snows the next day, oh well, that's New England weather for you!*****

"Seeing the sun" is relative. You might "see the sun" peak out from behind the clouds for about five minutes sometime in the after noon. That's not really going to melt anything.

That sure looks like fun getting to help your Mom with the fabric! Wheeeeee!!

We're in the bull's eye, too, of that snow storm that Parker mentioned. They are predicting 8 to 14 inches in our area. So much for Spring!

We love to help when mommy scrapbooks, but usually we get in trouble - not sure why!

We hope the rain doesn't flood you, but wouldn't it be nice if it melts the snow!!!

Your mum is furry bright on how to mix the fabrics on the back. Just do another quilt thing!

Lalalala, we are having lots of sun for the past couple of days. None of that white stuff.

This all sounds terribly complicated - making a quilt sounds like lots of work! (But fun work!)

wow, you guys just never get a break with the weather there. :-( Hopefully there will be an end to it soon.