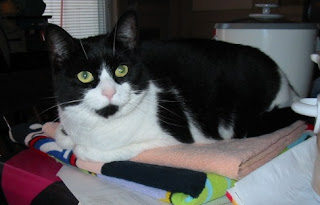 Speedy & Sadie left a comment yesterday, asking what did I think would have happened to me if I hadn't been rescued by Malcolm.

So today, I am posting "What-if Wednesday."

What if Malcolm hadn't picked me up out of the street? I would most certainly have been hit by another car and killed, and gone to the Rainbow Bridge and not even known any of the cats there! (how sad!)

What if Malcolm had picked me up, brought me to the v-e-t and said, "Put this cat out of its misery"? Would the v-e-t there have done it? Or would they have fixed me up on their own, and then put me in a shelter? (Dunno.)

What if Mom had decided she already had enough cats with her two senior Tuxies, Gizzy & Jasmine? (Oh! I would never have known Gizzy!)

Would somebody else have adopted me? (Probably.)

But Malcolm did rescue me.
But the v-e-t did fix my leg.
But the wonderful cats in the blogosphere helped with the green papers.
But my Mom did adopt me.
But I did make friends with Gizzy and Jasmine.
But I do have lots of friends in the Cat Blogosphere.

I am so lucky. Who would have thought that getting hitted by a car would be the start of the best thing that ever happened to me.

Labels: top cat, what if

Millie, you is living proof of what love can do! lots and lots of us fell in love with a beautiful little kitty that gotted hit by a car and saved by a nice man. and we and they and lots of others sent green papers to the nice man, and we read his blog every day to see how you were doing. and we was all 'acited when your mommy got you and brought you to live with Gizzy and Jasmine, in a wonderful forever home! And we still loves you lots!!

Millie,
You are a very lucky girl. We have been following your story ever since Malcolm found you - the very first blog we ever read was about you.
We are all lucky kitties, too, all unwanted in one way or another and found our way to our Mom and Dad. Our Mom always says she never has to go looking for kitties - the ones who need her will always find her.
We know you and your mom are sitll very sad, but we're thinking about you both and praying and purring for you two. We love you, Millie and Mom!
MamaCat & the FurryPurries
Ozzy, Alice, Bootsie, Freckles & Lola

Millie - Love is a very powerful thing. But you know that.
I am glad that you are where you are!

Yep, the Guardians at the Bridge turned you away and said you have 8 more lives to live.Live them as a Top Cat!!

We're happy you're here too ;)

Millie, its a greats way to think about life and the what ifs that plague us all. Like, what if I was not born a wonderfully perfect Meezer Male? ;)

What if your mum adopted little brother for you? You'd have a BFF to play with and cuddle.

We are so glad that Malcolm founded you and that your Mommy adopted you. Our Mommy was looking at pictures of Dante when he first came home (Maybe one day we will show them. He looked terrible - a real Frakenkitty)and she thought about how glad she was that he found them. Love is a wonderful thing and sometimes, it's just meant to be! Finally, we are also glad that we found you as a new kitty friend. Purrs!!

You are right. Sometimes really bad things have to happen so that the really, really good stuff can come along later! I know it was scary and painful for a long time, but now you are in a happy home with lots of friends! You are a real fighter. Way to go!

Malcolm is an earth-angel!

We are glad Malcolm found you, the vet fixed you up and your Mom adopted you! You are a cool and friendly cat Millie and we are proud to know you and be two of your furiends.
Your FL furiends,

We are so glad that there are beans like Malcolm in this world, and Doctors like the one who fixed you all up, and other beans that chipped in and helped with green papers, and of your course your Mom who ultimately came along and gave you your future home.

See stories do have happy endings!
And now you are TOP CAT!

Yoo know, being top cat isn't as much fun wifout a little brofur or sisfur to push around...just sayin'
We'z so glad dat God wasn't ready fur yoo so he sent Malcolm at just da rite moment to get the chain of love going so yoo could be our frend, in a nice furever home and be top cat and give yoor mom love and attentchun when she would haf been alone.

Mom says sometimes things are meant to happen the way they do. And things happened for you so you could find a great forever home. All your friends in the cat blogosphere are so glad you're here!!

That is a very moving post. Sometimes what ifs don't bear thinking about, I know your humans couldn't bear to think of life without you. xx

We are furry furry glad that it all worked out for you, Millie. It only seems like a short time since we were chipping in to Malcolm's appeal for your bionic leg!
Your mum is furry lucky to have you and you are furry lucky to have her.
Hope you enjoy being a Spoilt Only Cat like me, but maybe one day you will want to play with a Mite or two and then you had better ask your mum about that!

I am so glad that you were rescued. I sometimes wonder what my life would be like if My Lady hadn't rescued my brother, Clyde. So very lonely.

Millie, some we wonder ourselfs what life would have been like if The Big Thing hadn't "gotcha'd" us. It is something to think about.

We sure didn't hae yer dangers, we wee just found inna pet store. But from what we haf learned ofer the years, we mighta ended up in bad places, an we SURE wouldnt have ended up together. An that seems kinna weird after all these years together.

You have a big list of 'what if' which most of us kitties have. But we are happy that you ended up where you are.

WOWY - whut a story! A success story...sort of. Well, anyhoo...we is glad you gotted hit by a car. Um,...that didn't sound right. We is glad Malcom saved you!

Our Granbean always says that something good comes out of something bad. She's right, it does.

So, Millie,
you are very lucky, and so is your mommy.
You have been safed by Malcolm, and you are your Mommy's rescuer. It's fate and a joyful fate~!

And I am so happy to know you~!! Thanks Malcolm, you let us see a wonderful cat here~!