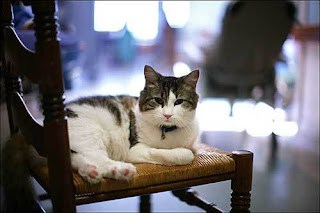 This is Oscar. He works in a nursing home in Providence, RI. You should read about him here in the New England Journal of Medicine. Then read the story the Boston Globe wrote about him here. The Globe also has pictures.

Oscar is now a Very Famous cat, as the Globe's story has been picked up "by the wires" and can even be found on CNN and Google News.

Mom doesn't know why Oscar pulled her heartstrings so much, but Jasmine told me that Mom's Mim-may (Mim-may's Mom) was in a nursing home in which a cat patrolled the halls much like Oscar. The nurses there said he would sleep on beds of residents who were near death also. This cat was unlike Oscar in that he also slept on beds of residents who were not dying. But like Oscar, if a resident was near death, this cat stayed.
Posted by Millie at 7:09 AM

Hi Millie,
I wrote about Oscar on my blog too!! Great (and gorgeous) minds think alike!!!

I entered you in my competition to win prizes on my 100th post - good luck buddy!!

Hi Millie, our mom read about Oscar and told us about him. He is a really speshal kitty. Mom says he is an angel, but mom says all cats are angels.

I just finished reading about him on the CNN.com website. How cool is that? Predicting when a patient goes to their own Rainbow Bridge. Love it!

I heard about Oscar on the news this morning.He's really remarkable :)

Donny and Marie and Casey said...

Mommy read about him yesterday!! Mommy found it a little creepy at first, but she thought that Oscar was a sweet cat to let the staff know to call in the family members.

Oscar is a great kitty and a lovable friend. We love him!

Oh, I read about Oscar. He is a sweet little grim reaper, and I'll bet he comforts the people in their final moments.

Cats just know things. They have a higher level of consciousness than even people. They are wise and beautiful.

Thank you for introduction for Oscar, he is really a great cat~!

Our momma's grandma has a kitty that is special for her too. It belongs to momma's momma, but likes to lay in Great grandma's lap cause Great use to have a kitty and remembers that. Great has some memory problems, but having a kitty around makes the whole world better.