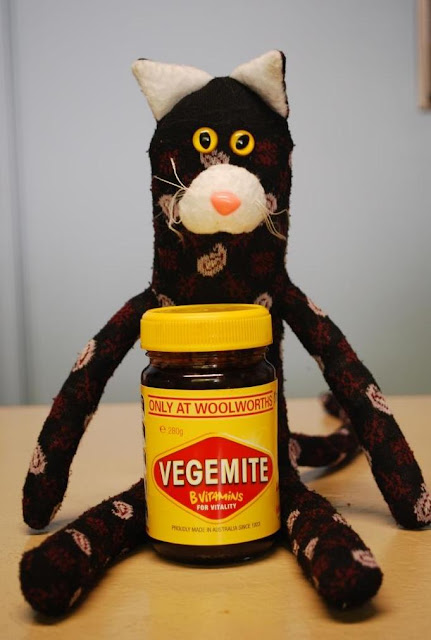 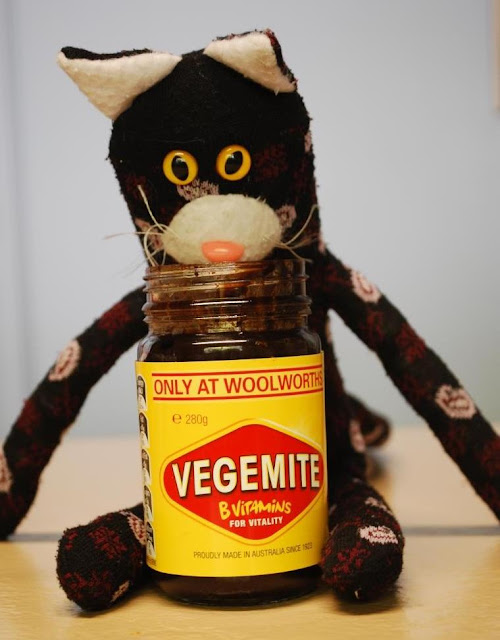 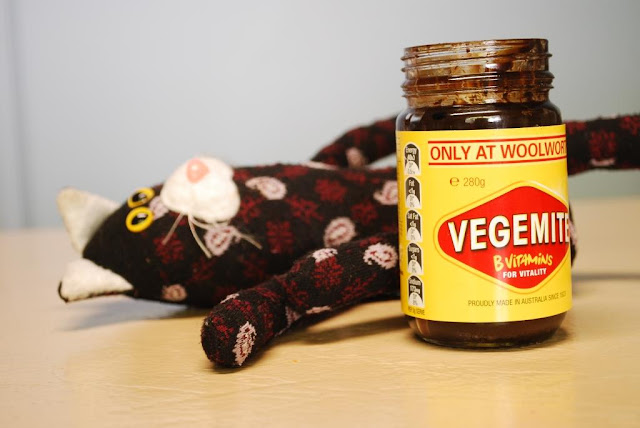 Millie - you're a real drama queen. I never knew that about you before today! Every other cat I've ever had in my house has enjoyed licking Vegemite off my finger. It's GOOD stuff! I'm hoping that you'll toughen up and agree to have a taste before you go home.

Don't hold your breath. I don't like tuna either.

OMG, OMG, you had me laughing out loud, Millie. Hilarious!!!

MOL Millie!!! You is tooooo funny

Are there really still Woolworths in OZ? The last one I knew about in NH closed around 20 years ago.

HAHAHAHAHAHAHAHA! Does Woolworth's still exist? We haven't had a store like that in the US in ages.

Yup. Woolworths still exists in Australia.
Millie, you need to toughen up. Vegemite is awesome stuff - it puts hairs on ya chest! MOL!

You are such a character, Millie.............but I am sure, absolutely sure, that Megan will be able to persuade you to have a lick ( just a little lick) from her finger, before you return to USA.

Did you know that iced tea can shoot a good 6 inches out of a human nose?

What exactly is Vegemite?

No. But thank you for sharing.

Mary Ellen- Vegemite is a spread - for your sandwich; toast etc.

It is meaty in taste; ( the name is a bit of a misnomer in that way); many Aussie children have it on their rusks, and crusts from a very early age. As you can see on the label it is a good source of Vitamin B. I think you could say that its taste is unique.

Very Aussie - many ex patriots talk of missing it so much when they travel abroad - often popping a jar into their luggage.

I could let you into a secret- I am sure that she wouldn't mind - Megan used to have it on her sandwich for school, almost exclusively.

I hope that info. helps.

President Obama apparently described it thus: "So, it's like a quasi-vegetable by-product paste that you smear on your toast for breakfast – sounds good, doesn't it?" Apparently he's not a fan! Not many non-Australians are. I think the trick is to acquire the taste when you're very young.

Great! You like it so much YOU eat it. I'm sticking with real live dead beef.

Getting ready for a visitor?

Mum remembers a reference to Vegemite in a song from an Austrailian band(Men Without Hats)
She still does not know what it is :/
Seeing your reaction,Millie, we are not sure we want to :o
Purrs Georgia and Julie,
Treasure and JJ

PeeEss:
We giggles at the comment from the Monty Q blog.
Bet that tea did not come out ob Delilah's nose ;)
hahahahaha