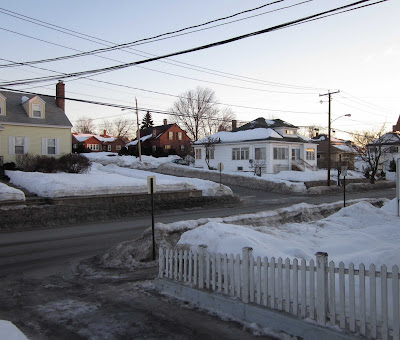 Would you like to guess? I am having a contest. The cat, woofie or bun who guesses the date when there is NO MORE SNOW when Mom looks out this window will get a prize. The prize will be treats, and bragging rights! (Occasionally evil little chocolates have been known to appear in prize packages, but Mom is making no promises.)

Every morning Mom will get up and take a picture of this same view and post it on my blog. On the day she wakes up and THERE IS NO SNOW ANYWHERE IN THE PICTURE will be THE DAY. If you guess the EXACT day, you will get a prize. If NOBODY guesses the EXACT DAY, the cat who guessed the day CLOSEST TO the day, but not AFTER the day, will get the prize.


Here are the rules:
1. Each cat, woofie or bun gets ONE GUESS EACH.
2. Guesses must be in the comments of THIS POST.
3. Deadline is Midnight Friday February 18, 2011. (So when it isn't Friday anywhere in the world, the voting will be over.)
4. You have to have a blog, or leave some way for us to get in touch with you, so we have to know who you are. If you have a blog, you're good to go.
5. You can enter no matter where you live. Australia, the United Kingdom, New Zealand, Canada... all are welcome to enter.
6. It's my blog, so if I wanna change the rules, I can.


Now for some useful information.
1. The houses across the street face East. So the snow in their front yards will melt first. Duh.
2. Sun melts the snow.
3. Rain melts it faster.
4. The average high temperature for March in New Hampster is 44F
5. The average low temperature for March in New Hampster is 18F
6. Winter isn't over, either. We have had big snowstorms at the end of February, and in March. It snows in April, too. So, guess accordingly.
7. *****The contest ends when there is NO SNOW on the ground in the picture. If it snows the next day, oh well, that's New England weather for you!*****
8. In 2008, the winning date was April 12. In 2009, the winning date was April 3rd. In 2010 the snow was gone by the middle of March.
9. We have A LOT more snow on the ground now than we did in 2008, 2009 or 2010, so this year the contest is starting in February.
10. When the contest is closed, Mom will post a big list of all the entries and dates in my sidebar, so everybody will know who guessed what date. It is your responsibility to check that your name is there, and that your guess is correct. It's usually a big list, and adding the names gets complicated, so if your name is missing, let me know right away. No names will be added to the list after February 25.

So put on your thinking caps, leave a guesstimate, and check back every day to see if you are the winner!

Ok, we are going to guess that all the snow will be gone on April 20th. This sounds like a fun thing to do. Hope you have a great day

The Royals and Gentleman Beau said...

We will wager that the snow as it appears now, will be gone April 9th. We chose this date because QM Rose's Mum's birthday fell on that
day.

It's always a fine day when the snow goes back to the Heavens for next year!

Have a Blessed Day!

Rose
and the Odds-Taking Royals

My baby's have agreed that March 23rd is their guess for this year :)

We are going to guess April 17. Hope you thaw out soon!
-Pepper, Smokey & Cali

after much hissing and spitting and hollering back and forth, the meezers and billy haf decided upon March 28.

April 6th. I am hoping the snow here goes away much sooner than that though. My kitty is dying to explore outside again.

We think the snow will go on March 27th!

Each cat, woofie or bun is allowed one vote each! So Sammy, Miles, Nicky and Billy can each have their own vote. Same thing for Hannah and Lucy!

Ok, here are our guesses as to when the snow will be gone.

What a fun contest!

Thanks for your reply Millie - we have chosen:-

I am going to guess April 18th. I do not think you will be done with the snow for a long time this year.

I had to explain my Californian monster kitties what snow was, and asked them to guess when will the white fluff in Hamster go away. These are the answers they gave me:

Sima: "White fluff never goes away. It follows me every where."

Sweet: "I have white fluff, and it doesn't go away no matter how much I keep licking it."


Poonjoo: "I want some of that white fluff of new Hamster."

Moonjoo: "Oh look, there goes the little birdie again. Did you see that? *head-butt*"

Have I mentioned that they all have ADD.

We always have so much fun with this contest.

We are going to guess:

our woofies (brownie, big boy and penny) want to guess too.
they all says march 31

We love this contest. We're going with April 5.

ON goodie we love this contest!

What do I know? I've never seen snow in my life.

Oh yes!! We love this contest and totally missed it last year!! So here are are guesses....

Thanks for the cool contest Millie.
Your TX furiends,

Allie says April 29 'cause it's her birthday

The Florida Furkids and Angel Sniffie

We are thinking and will post our dats soon!

April 3rd! I hope I didn't miss it as I was scrolling.
Rusty

Having never lived with snow, this is a bit hard, Millie.
So a stab in the dark - April 14th will do it !
(P.S. I prefer milk chocolate, thank you!)

Here are our guesses;

April 11. Being optimistic for you that it'll turn warmer soon.

Dora would like to pick April 2nd. Thank you for running a fun contest again!

Dora the Explorer and Kate

We are gonna go WAY out on a limb and pick April 26th!

OK maybe these days have been guessed.

Millie, you scoffed at my Snow??!! There WERE some flakes, yesiree, prolly like fifty of them, or even a hundred! Oh sure, you can sneer at our pitiful flakes when you have those giant piles of it--but c'mon! We even had pictures! Though I grant you, it wouldn't make for much of a When-When contest ;-)

Claude and Marlene would like to guess: April 10th!

We are going to guess the first day of Spring March 20th.

Because the snow in Indiana is melting so fast, and Little Bear has been out in the yard without freezing his paws off, he says Feb. 28th.

His sister Emily, on the other hand, likes to go out, too, but will not if there is even a hint of snow in the air. She says no way before April 15th, and that's being optimistic.

The arfie (he's too little to be a woofie) next door is out in his yard every day. but we don't think he likes it much 'cause he BARKS.ALL.THE.TIME.

Mac Says it will be March 21

Hi, Millie!
If no one else has guessed it already, we 8 cats here at the FurryPurries pick March 18th, our MamaCat & Dad's anniversary!

Ellie and her three cats said...

Ok we will try, although we are so terrible at this game. He are our entries:
Squish: 28 April
Madness: 21 March
Trouble: 2 April
Bubbles: 16 April

You can reach their Mommy at nelson_lisa_marie@yahoo.com

If you mean the snow from the last storm it will be all gone by Sunday as there will be rain and it will all melt. That would make it February 20. But oh no winter is never ever gone by then. The mom here remember that we had a snow storm in the middle of April and my grandfather said he drove home from work in a snow storm the first week of May, he lived in Ohio.
I think the snow will be all gone furever, no snowflakes April 15. Yep, that is a good day. Taxes due and snow gone.
My email address is: gracie1915@frontier.com