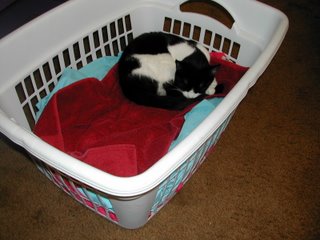 The Lady yelled at me the other day. I mean really YELLED! She screamed at me. She kept yelling and screaming NO NO NO! I ran far away. I didn't like that at all. I was in the kitchen and she was cooking. Later she told me that I could not get on the stove any time no matter WHAT.

It's hard though. Today she made something called a frit, frit-tut, frit-ta-tut, frita, oh whatever. I know it had eggs and ham (which I wanted), and cheese (which I also wanted) and some onions (which I most certainly did NOT want) and some other stuff. It smelled up the whole house. But she didn't give us cats any.

Then she put some meat on a pan and stuck that in a box in the stove. That smelled really really good, and I wanted it. Then she took it out of the oven, and put it in this thing on the counter. She added all kinds of stupid stuff, like wine (ick) and tomatoes (yech). That's been smelling up the place all day, and it smells REALLY good.

I spent a lot of time in this nice basket with some clean warm stuff in it. At least I can do this without getting into any trouble.
Posted by Millie at 4:55 PM

Stoves are danger-ous! They can get really hot and you can get burned, which will h-u-r-t. The Lady is just looking out for you so you won;t get hurt.

When I was a kit, not much older than you, I got some of my whiskers burnt. When my person saw that I was close to the stove she yelled at me too, but I didn't listen and I stuck my face close. She grabbed me and stuck my head in the sink with the water on! My whole head got wet. But the worst part was that all the whiskers on my left side were all burnt and curled up. It took weeks for them to grow back straight.

Its best to stay on the floor and meow as loud as you can that you want some of the good smelling stuff. Oh, and walking around and around and steping on the Lady's feet while brushing your tail all over her legs will not let her know that you want some. I know its hard to wait, but its the best thing to do. Isn't that what Gizzy said?

Opps that should be:

Oh, and walking around and around and steping on the Lady's feet while brushing your tail all over her legs WILL let her know that you want some.

Buddah walked across the stove top when the oven was on once. He only did it once. And man, he walked FAST once he realized it was a little too warm for his tootsies.

When I was tiny I tried to get up there when the top part was on. The Woman said something about fire and burnt kitty... I think we all try to check out what the People are cooking.

Nw...I stay on the floor or the counter, and if I'm really good while they at, I get a small bite, which is better than no bite at all. Well, unless it's something not kitty friendly or it would make flames shot out my butt... Then I don't get a bite.

Oh, Millie you should stay away from the stove. It will hurt you. It is much better to take a nap in the warm laundry. Very safe and cozy.

Millie, I love the pix of you in the basket. You are still so Widdle-iddle.

I like to watch the humans cook too. There is a ledge above the water-hole that is just for me to sit on. Sometimes I tried to get onto the counter to get a good look at what was going on, but everytime I did, I got a spray of water! I didn't see where it came from, but I know it is much drier on the ledge. It looks very dry and cozy in that basket!

Wow! I am kinda glad that your Lady yelled at you. That is much better than getting burned. Try not to feel bad about it.....she does it cause she loves you.

we shure duzzn't want ya ta get hurted by the bad stove! we neffur effun tried ta jump up on the stove or the counters. there really isn't much room fur us ta get up there anyway - our people gots too much junk efurryware