The Lady came home tonight and cleaned the table in the table room and the rest of the room too. Then she did ALL the dirty dishes, which was pretty much all the dishes she has. Then she did some "laundry." Then she made herself dinner (it was pork and I got some). THEN she did a little sewing, but not with the machine. She did it with a piece of fine string and she put a real neat shiny thing on one finger. I wanted it, but she wouldn't let me get it.

She is making a jacket. There is a story about why she's making a jacket. She is always cold at her work. Even in summer. So she likes jeans jackets. Or jackets like that. She saw a neat one at the PEM gift shop last week that gave her the idea of making one. 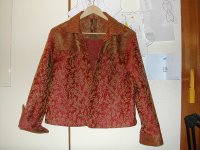 Now, I have to tell you a "back story." The Lady has lost 40 pounds. She "made Lifetime" this summer, right after I got my leg fixed. And since she lost so much weight (I mean, that's 8 of me, where did it go?), she needed ALL new clothes, since nothing fit anymore. When she sews, she has to keep her hands clean, and that means no snacking on things that will make her not skinny (and she LOVES being thin), and she says sewing relieves stress... (now frankly, I think she could use more naps...) so she decided to make a jacket. (Except I'm pretty sure she's gonna make more than one. She already has plans for at least two more in her head...)

She says it isn't finished, but it looks done to me. She says it needs buttons and buttonholes. Anyway, here it is. 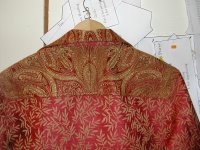 She says to tell you all that she has been sewing since she was in 4th grade, and that was a really really really long time ago.
Posted by Millie at 11:35 PM

Bob sews too some times, but I have never seen him make anything that big. Monika told me that he made his laundry bag though and it is very nice. He saya he likes it, but he wishes he had remembered to preshrink the material, because it only holds a medium sized load now.

Congratulations, wonderful Lady, on your weight loss! How great is THAT?!

And I'm quite impressed with your sewing skills. I have none, so my former-sailmaker husband sews on buttons that popped off. You can bet they never come off again!!

Wow, maybe I should get back into sewing and lose some weight. Millie you have a very talented mommy. Congradulations on being skinny *sigh* I remember being skinny...

Ooo Millie maybe she can make you an outfit too!?!

that rite there is furry purrty! losing 40 pounds is a hard thing ta do - congratulations! our Lady gained 40 pounds on purpose (long stupid story) an now needs ta lose it again but just discovered that when ya hit 40 years old it's way harder ta lose weight than it was when you was lots younger.

p.s. haf her make you a Halloween costume fur the contests at Skeezix's an Hot(M)BC

CONGRATULATIONS Lady! That is awesome! Mom got put off sewing in 7th grade when the nasty home ec teacher made her re-do a collar 5 times. Stuff like that sticks with you for life........

Wow that is a very purty jacket.
Our Mewomie can barely sew on a button, so she is very impressed.

concatulations on losing the weight! you are so talented with the sewing - i made a pair of pants in home ec in 7th grade - it took 2 years to finish. I just cannot sew. knit and crochet - no problem, sewing, everything looks like a bird cage cover. - Meezer Mom

Our Momma sews with a little stick and hole and string sometimes, but she likes to use a bigger stick and yarn too. She likes your Momma's jacket. ~Merlin, Shadow, Ko KO

Ps tell your Momma concatulations on losing sew much weight

Concatulations on losing the wieght!! Our Momma sews sometimes...nothing like that though. She prefers to cross-stitch, and is learning to crochet.

That is a furry nice jacket. Mum sort of knows hows to do this but not this fancy anymore. Plus not much time.

Concatulations on becoming a liftimer (with WW?)! Our mamma lost 75+ three years ago. You've achieved an amazing milestone. Keep up the great work.