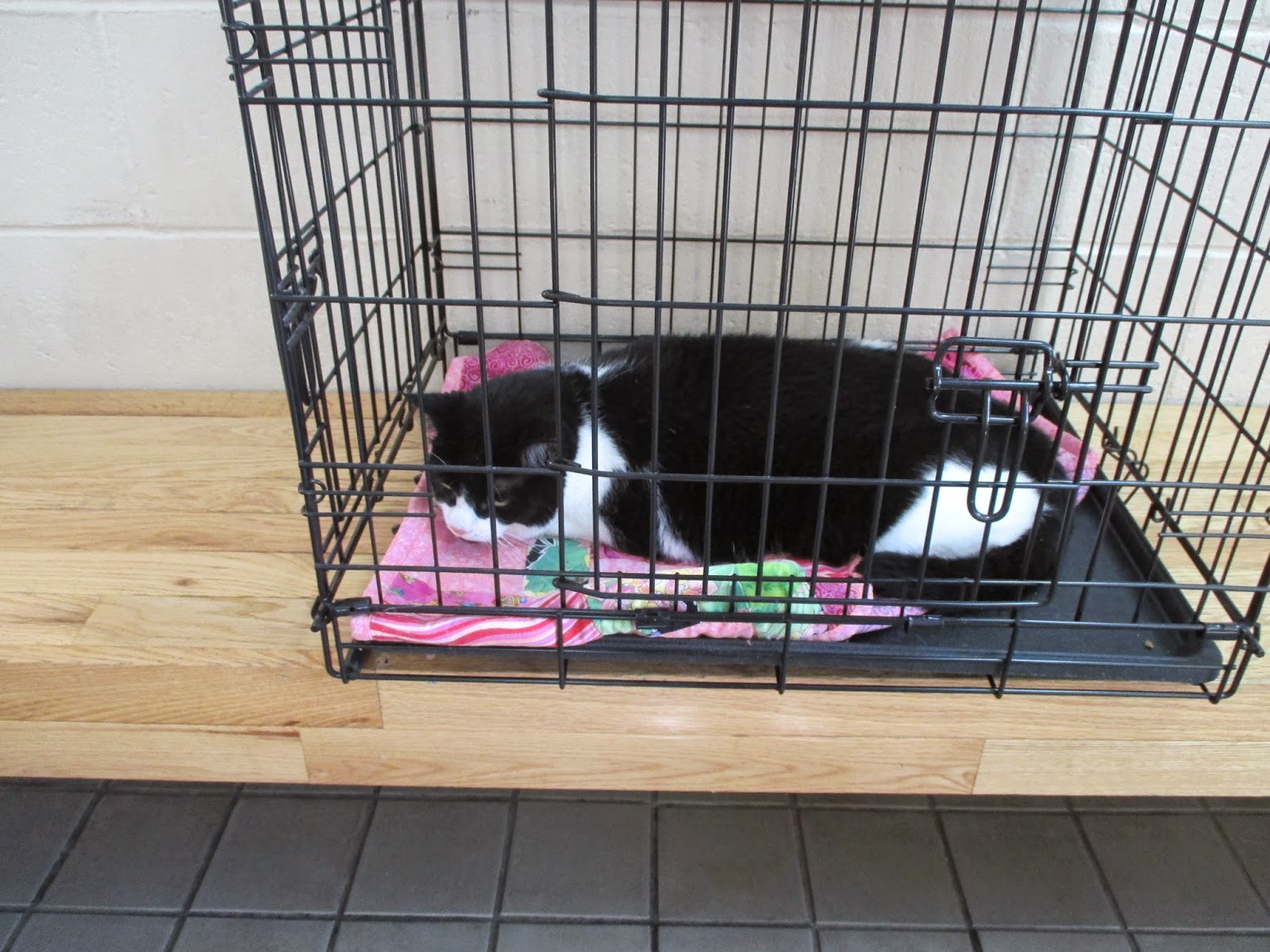 Mom got me in the cage. Really, it was the only one she could wrangle me into.

It wasn't pretty, and claws and blood were involved, but in the end I was unceremoniously carted to the v-e-t. 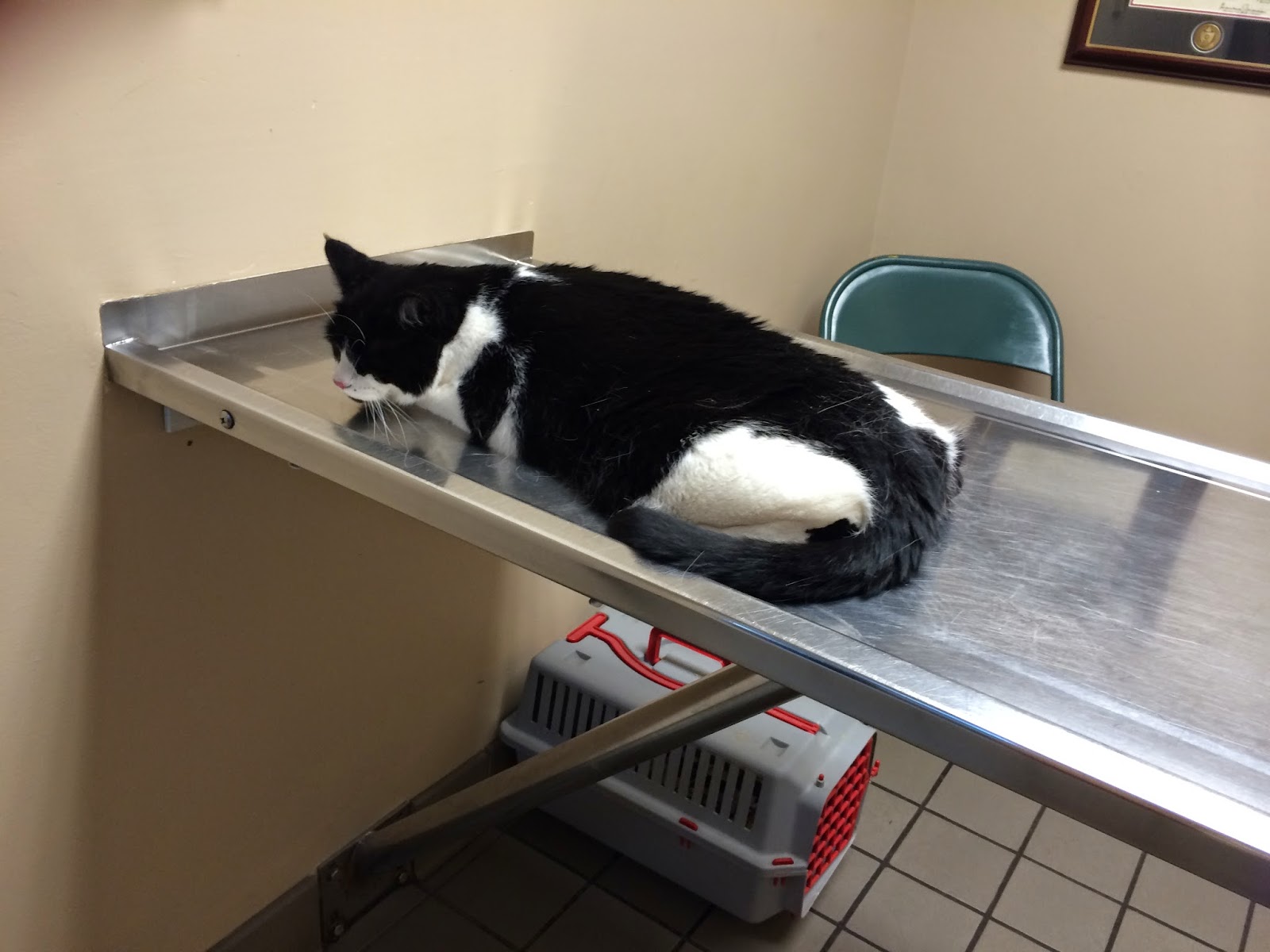 I must admit I have a wonderful v-e-t. 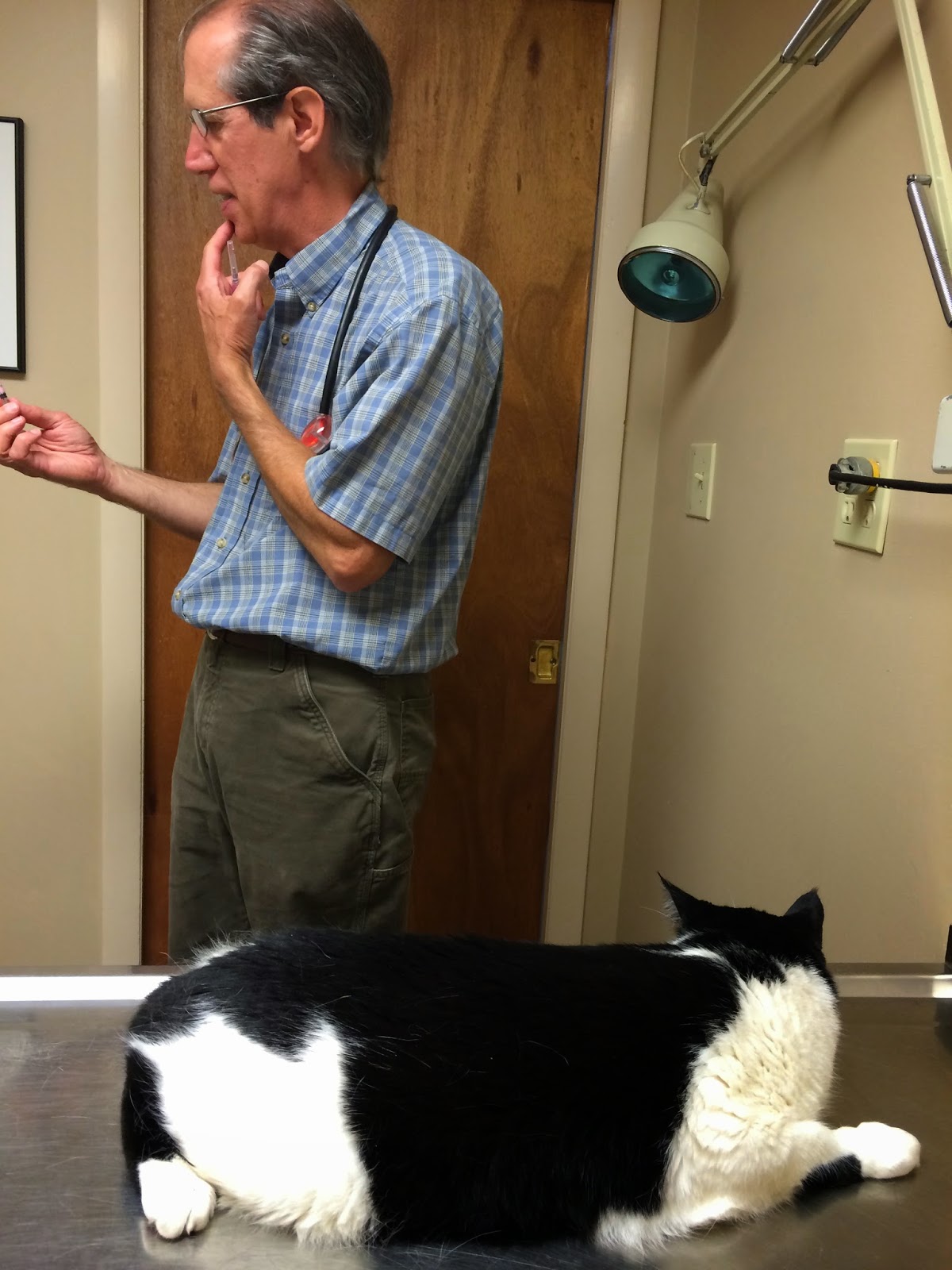 His name is Dr Lewis and I am always a good girlcat for him. 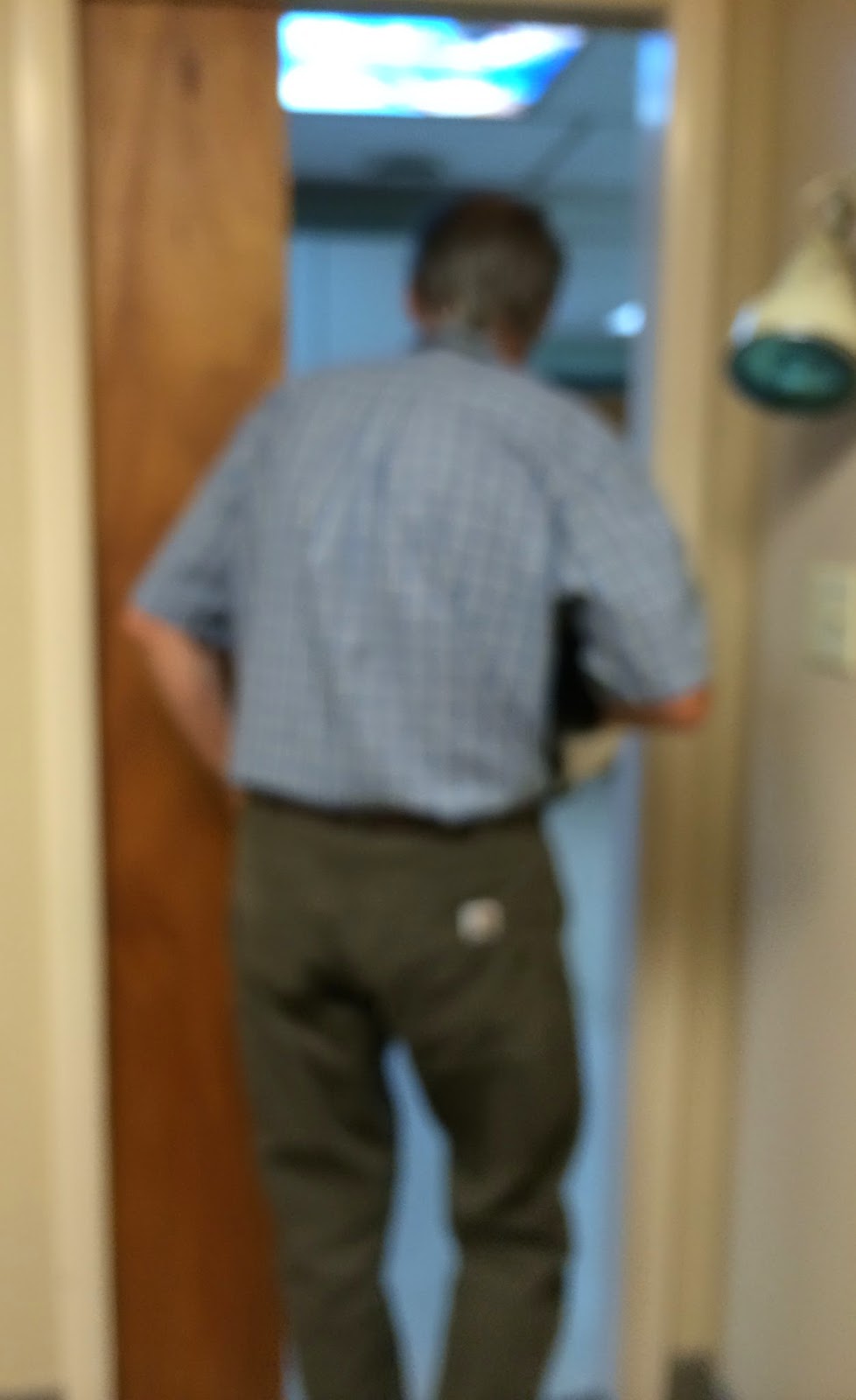 After all, I don't let just anybody pick me up and carry me around. Dr Lewis says I weigh "about" thirteen pounds, but that's kind of a guess since he kept one hand on my back when I was on the scale. He thinks I am purr-fect! 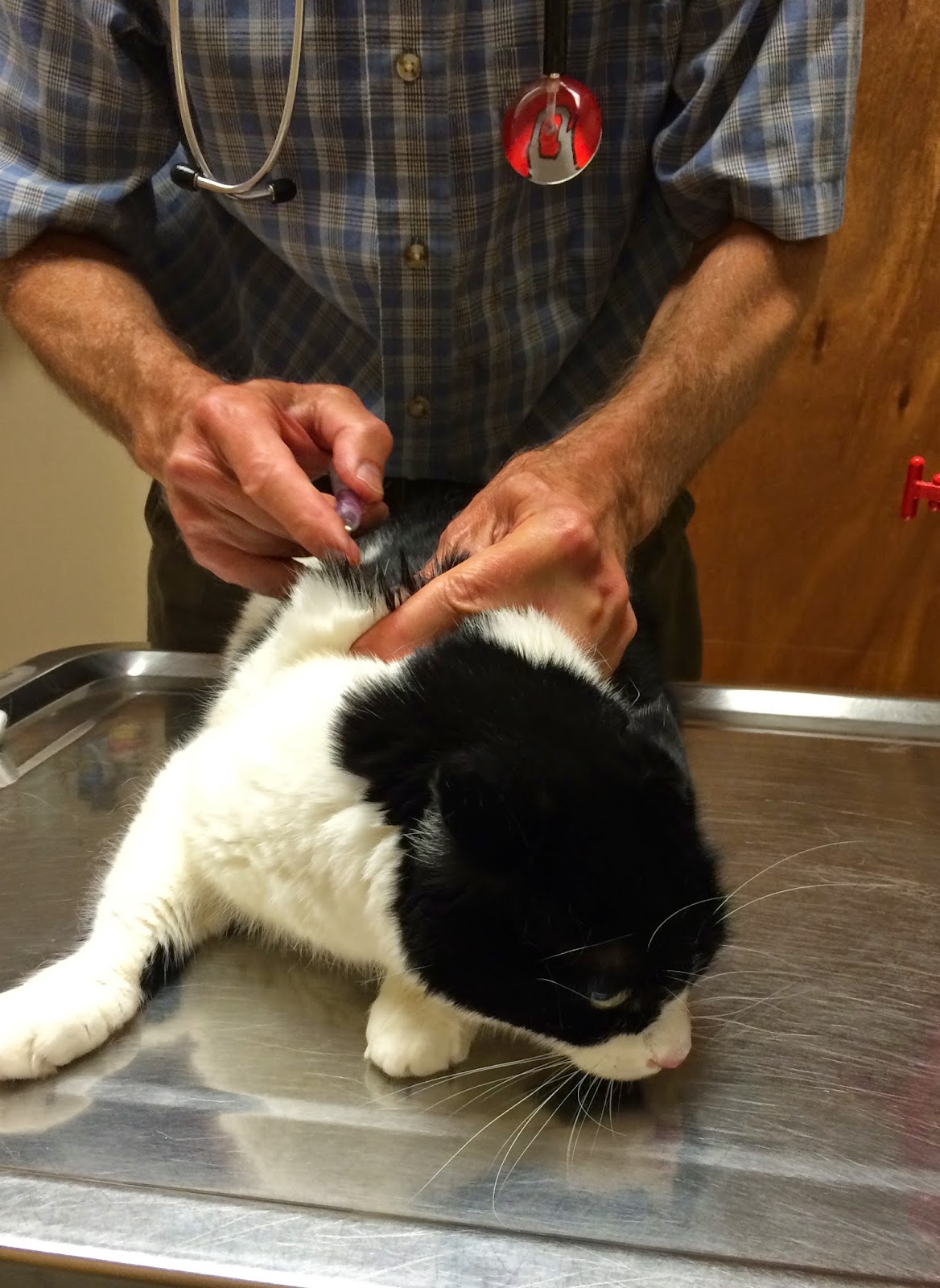 I couldn't escape the shots, but I know I need those to stay a healthy cat. 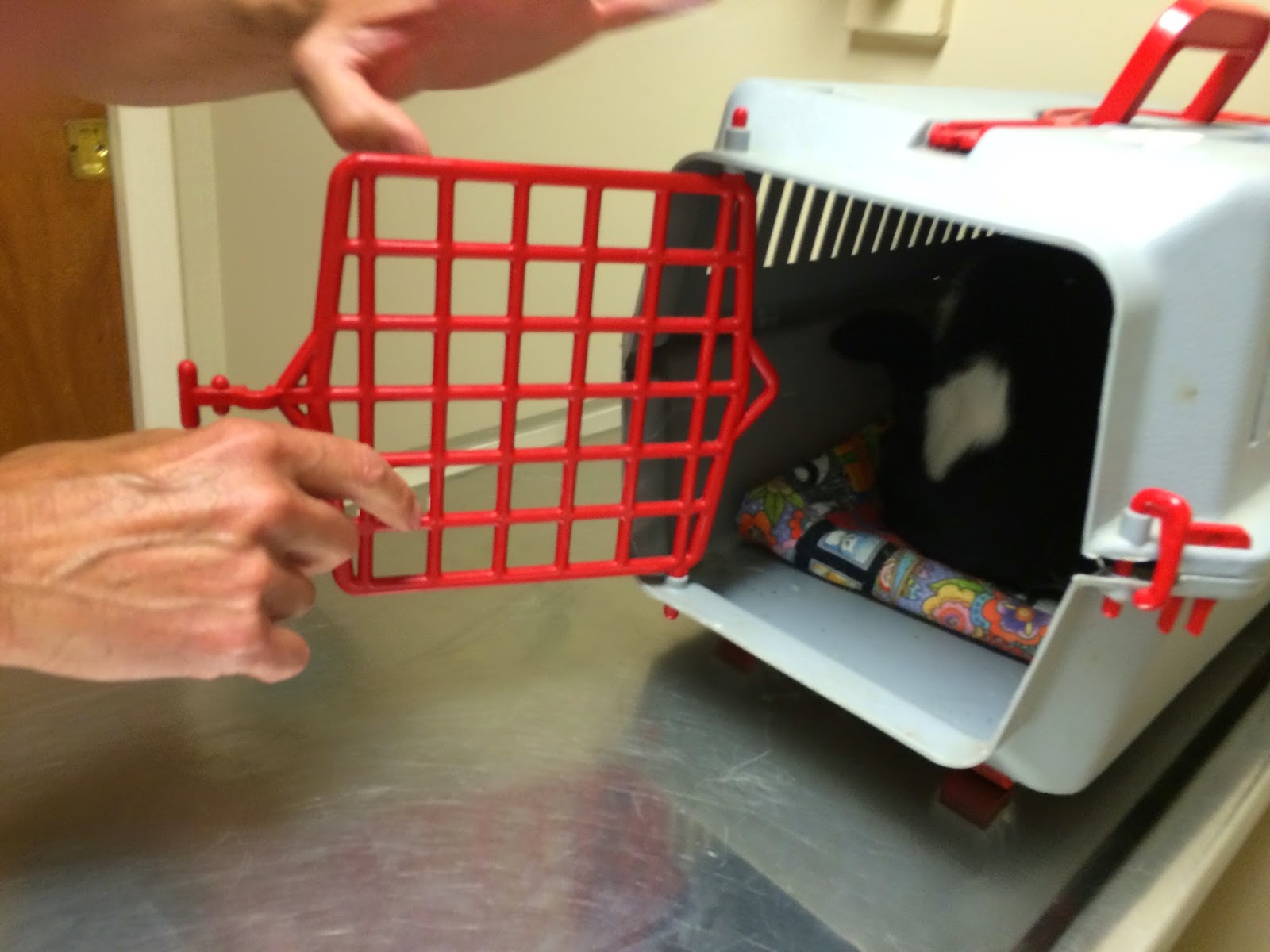 After that I was MORE than happy to hop right into the little carrier Mom brought.

Dr Lewis and Mom talked about giving me "tranks" to help me relax come M-word day. He wants Mom to "test them out first to see if they work." He says it isn't like the movies where I take something and "go limp." He says it takes three or four hours to work. He says on M-word day he wants me to take them with breakfast, so they can take effect while the guys fill the truck, then I won't be as stressed when I get to the new house. He thinks it's a good idea to get me into the bathroom while they pack up, and he wants me to go into a room that is all set up for me at the new place. I know that is what Mom wants too.

As for "trying it out first..." I am not sure about that.

Mom Lynne here...
Dr Lewis is very impressed with how tolerant Millie is of me and how she acts once she gets to his office. He thinks I have done very well learning how to get along with a feral cat, and earning her trust. "She's never going to be a lap cat," he said, "and she's always going to be wary, but look, she isn't hissing or trying to get off the table. And she's letting me pet her." When I told him how she gave me the business when I got back from vacation once, jumping onto the coffee table and meowing her frustration at me, then jumping back to the couch to get scritches, then jumping back to the coffee table to meow at me before finally settling down next to me, he thought it was hilarious. "REALLY? Well that just proves she really loves you."

We think it is very evident just how much Millie loves you! (and you love her too!)

Yaaaay Millie. I'm so glad that the annual vet thing is now behind you and although there was hissing and blood, it seemed to have been relatively successful.

I really do think you are to be congratulated and that the score should be: Millie 2 Mom 1.

And of course Dr Lewis thinks you're perfect - he knows a lot about cats and he wouldn't have met one as perfect as you before. I'm interested that you let him pick you up but you don't let your mom pick you up. Why not?

I think the tranks will be a bit like an overdose of catnip.

And push your mom hard for lots and lots of special treats.

Well done, Millie.......I am glad that your visit to see Dr Lewis went so well. Did your Mom explain to you that we hoomans have pricks and things sometimes to keep us healthy, too?

Good work Lynne and Miss M. I must say pops has NEVER gone into her cat carrier by herself. I have to be super shifty and do a snatch and grab to shove her in.

Sounds like you have it all planned out for moving day. Another suggestion is to print out a couple of signs to put on the door saying Do Not Enter, Wild cat inside!! That way you can get everybody to leave the room alone.

Another friend is moving next week and she said her cat is beside herself, hating all the activity and changes, and will go into the cattery for a week due to her anxiety. Pops loved the boxes and all the sniffing of stuff out from wardrobes and cupboards.

We take it the spilled blood was your Mom's Millie.
Score Mom 0 - Millie 1.
Luv Hannah and Lucy xx xx

When MomBean brought Dude Newman and Domino down to MD, they had to tranquilize both of them. (It was a 12hr car drive.) It made Dude Newman really, really super mellow-and he was pretty chill as it was. Domino just conked out for most of the drive. When she woke up she was a little goofy but fine. (She was a tiny cat, maybe 8lbs tops?)

Mom tried some of those drugs on Ivy once. She didn't go "out" but was more of a mellow drunk. As for the m-word...last time mom left us locked in the bathroom at the old place until everything was moved out, then moved into the new place, then came back for us and put us in our own set up room until things were a little more organized. It helped that while it was a new place, it still had OUR stuff.

That is a good girl. The vets are nice, Angel acts the same way.

We're sure she loves you!!

Oh Millie, hopefully all will go smoothly for you on M Day.

If your mom wants a better idea of your weight, all she has to do is weigh herself holding you in the woofy carte on "M" day. Then of course subtract herself and the crate.

Well done Millie! I'm certain both you and mom were happy to get that taken care of.

I agree with other comments, it's pretty clear that Millie loves you, even if she's a bit more reserved than some cats.
My Silver was that way, no way would she sit on my lap, and petting was only tolerated for brief moments. But she was the cat who hung on the arm of the couch or easy chair with me every evening.

Good luck with the tranks and the move!