Yesterday Mom went out to do some shopping. She did some errands, and then went food hunting at a new food hunting place. Mom liked it.  She says there was everything she could ever want, which is really saying something because she is very fussy.

She put all the foods in the trunk of the new metal masheen, and when she was leaving the parking lot, she accidentally drove up on a divider. So she backed up, rolled off, and then drove away.

Partway home she noticed a light on the dashboard, telling her one of the tires was low on air. She pulled into a gas station to fill it, and saw the tire was flat as a pancake. She called Triple-A and when the guy got there he said, "Oh, THAT's wrecked.  You're gonna need a new one of those."

In other, better news, Mr Karate is in Yosemite Valley with uncle Mr Photographer. 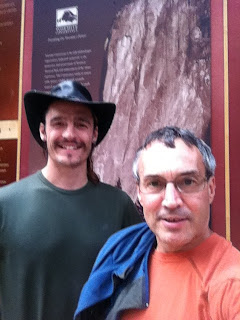 and Mom says the big project is coming along very nicely, 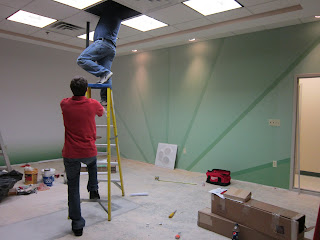 although I cannot figure out why the guy in the bloo shirt doesn't use the door if he wants to leave.

Poor mom, what an expensive pain having to get a new tyre. Glad she enjoyed her shopping though.

Yeah, poor Mom. Glad she made it safely to a gas station and had Triple-A. What an inconvenience! It happens to the best of us, though.

Oh no! Ruining a tire is always a bummer, but especially when it's a new car. :-(

We are glad at least that Mom was safe when the tire went flat. Things like that are maddening.

Aren't you glad your a cat?!

Yuck, that bites when a tire blows. Happy you were able to drive as far as the gas station safely.

I totally understand the frustration - it's really a nuisance.

That's awful but at least she wasn't on the freeway.
We sat outside and finished the 4th Gamache mystery with mom. She continues to be amazed at how wonderful the series is and says to thank you very much for the recommendation.

WE are sorry the metal machine needed a new shoe! Hope Mo got home OK!