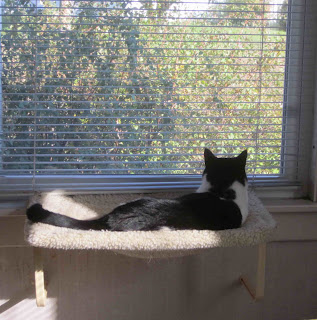 I am enjoying sitting in my cat hammock and watching bird TV.

Mom, on the other paw, is running around like a crazy bean.  Next week is officially The Week From Hell for her at her day hunting gig. It's the big ERP migration to a virtual server and MSSQL. She says the you-sers are going to be connecting to a new Citrix server through a brandy new Receiver.  She says everybody is going to be DOWN for a while while data moves.  She's going to be getting in early to her day hunting gig, and staying late. When that's done, the software that cooks the books is gonna change too. In the middle of all of it she has to go to the human v-e-t (nothing special) and get her head furs cut.  Then she's going to be teaching a quilting class on Saturday.

Now, I know (and a lot of my kitty friends do too) that MY Mom is super-wicked organized.  She's got her quilting class all ready (and most of the stuff she will need is already packed, too).  She's done everything she can at the day hunting gig to make sure the Week From Hell is really the Week of OK. If I know my Mom, she'll even have easy to eat dinners already planned so she doesn't have to mess up the kitchen much.

So if you don't see me much next week, you'll know why.

Now don't you worry. I'll make sure to sleep next to Mom each night, and make sure I get my scritches because that helps calm her down.

Millie, all those compoooter terms make our heads spins, but we bet your Mom is a super expert. Here's to a successful week for her, and a quiet one for you.

Well, you make sure ta do yer best ta keep Mom all calmed down next week, Millie!

My human knows a little bit of that wacky language from your human's work and she says it sounds like a Really Big Deal, and combined with everything else she is doing, it will be no wonder if you are a little scarce!

It sure does sound like a big deal! Hope no bugs creep in to mess up the OK. It's a good thing your mom has you to keep her sane, Millie. And warm!

Your Mom may meet her self coming back if she is not careful! That sounds like a very busy week. We know you will do your part to make it easier!

Lots of hugs and smooches for your mom every night Millie - that's what you can do to help. Perhaps you could also take some extra naps to help make up for the sleep that she'll be missing.

Besides bein pretty, you are very smart too, Millie! Keep the hooman that feeds you, happy! xoxo

We send purrs that the week goes well for your mum. Help her chillax once she gets home.

Your Mom's certainly going to be busy, Millie - but just tell her to hang in there , and everything will be OK.

It's Very Thoughtful of you to take such good care of your Mom, Millie!

I hope the week from hell turns out not to be that. *hugs*

A cat's job is very important, after all.