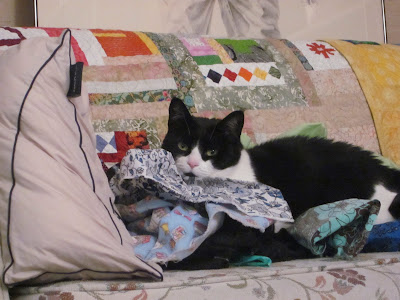 Mom and I are ready. Mom has done the dishes, she has mowed the lawn. The groceries are finished, the garden is planted and watered. I have had breakfast, done my bizness in the litter box, and had my morning nap.

We are settling down to watch Roger Federer and Rafael Nadal in the Men's Final of the French Open.

Oooh, that's great that you planned everything so well. Mom is interested in the result but doesn't have the patience to watch the whole thing. But we can keep it on in the background.

You two take your tennis seriously!

Oh Millie - Roger didn't win. Big hug to help you deal with the disappointment. I hope you enjoyed the match in spite of the result.

Tennis championships are very important to my Mom. She used to play and loves to see who wins. Good luck to Roger!

Our Mommy doesn't watch the French Open. She says the red clay hurts her eyes. I don't know how it does 'cause it's on TV and it's not like someone is throwing it in her face.

Glad you got to enjoy the afternoon watching tennis.

I take it your guy didn't win. Sorry.


The Florida Furkids and Angel Sniffie