Mom promises me she will take it easy today.

But that's only because she worked all day yesterday. She cooked a big piece of Beef in the crooket pot. 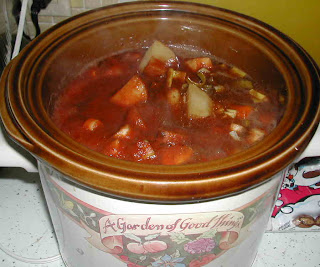 She roasted chick-hen in the hot as hell box. 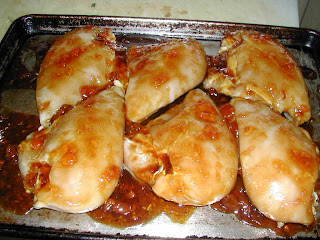 She made some tomato-vegetable soup. 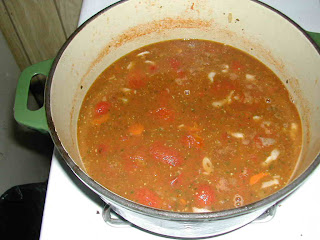 And she made a squillion mini-meatballs (these have bacon in them). 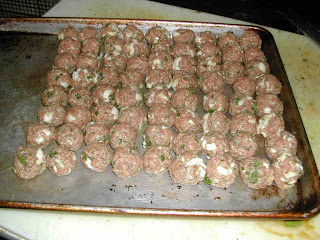 Good question. Mom says a Very Very Very Big Project is going on at her day hunting gig, and that she will be working a lot a lot and probably every single Saturday until after New Year's. She says she's getting a Rack for her servants; she's getting a new wall of fire and vee-pee ann's; she's getting a big gig snitch and the rack is getting wired. (No, I don't know.) Plus she's getting a second Tee, and it's gonna get bonded to the one she has now. She says she's changing Eye Ess Pee's and all the Dee Ann Ess stuff is gonna change too. And that's not all. She says she's getting a new servant to help her old one hold files and all the printers are going to move to the new servant. She says she has to map all the new paths to the new servant. (He sure does sound lazy for a servant, if you ask me.) Then she says a new guy is gonna carry the Long Distance and after that she has to upgrade the accounting package and change all the account numbers. Then she says she has to change about 100 Crystal retorts with those new account numbers and after that she has to close the year. (I thought that happened on its own.) Oh, I forgot about the 6 new computers she has to set up, and that she's gonna Mozy all her servants.

And then she has all her other normal stuff to do. So she's trying to have foods ready to eat because she knows she's not going to have a whole heckuva lot of free time.

Oh, and did I mention that everybody is coming here for Turkey Day?

So here is a picture of me, so you won't forget what I look like, because after listening to everything she has to do between now and then, I get a feeling I might not be blogging much. 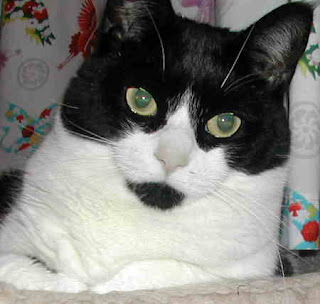 Labels: Easy like Sunday, glad I am a cat

Wow, that's a lot of yummy food that your mom made! YUM. Those meatballs look sooo tasty!

Sigh, why can't DKM eat meat like your mom.

WOWY - that looks like some par-tay food to us!

hI, it lilly lu here i like to send you a super duper hoilday card but i need your address can you send it to

WOW! I feel tired just reading what your Mom is going to do!

We could never forget you Milie - you are way too cute.

Millie, does your Mommy speak a second language? It sounds like she does.
Oh, and may I come over for dinner?

Yikes! Our brains would explode if we had to do all that. When is the relaxing time for your Mom?

Wow, all that tech talk made us hungry for some of that food your mom cooked. Mmmmmm.

We finally got our Mr. Milky raffle prize pix posted and you're mentioned. Bet you can't guess how.

Yep, mum cooks ahead sometimes too. But she certainly doesn't have to work as much as your mum is for this. Hope things go smoothly for your mum. We won't forget your petty little face.

That food all looks SO yummy!

We asked The Big Thing what all that astuff Mom is doin, but had said he dint have the slightest idea... But he said it meant puter stuff an he was very impressed!

Your mom is very smart to get the cooking done ahead of time. A little work now saves a lot of work later.

Momma says she can just imagine your Mommas diary!! When it rains it pours she says... well duh Momma

Your Momma is very smart, a lot of old people cook their food for the whole week because it also saves on energy bills, I think it is a very good idea and Momma should do it.. but would have could have should have....It does all look very nommy!

Mmm, yum! All dat stuff yoor mom is doing fur da servant...why, aren't servants suppose to wait on da beans? Mom sez she does not miss when she would hafta close a month and den close a month den da year, we don't get any of it and yoor right, it's good to be a cat.

Darling Millie, you're going to have to give your Momma some extra lovin' when she comes home for the next long while. She's gonna need it!

That sounds like a lot of stuff to do! The Tall Man is busy designing his brand new server building and all of that stuff. He knows it will be a lot of work but he's especially obsessed with cooling stuff. I hate cold air, not sure why servers like it.

Millie you are the cutest kitty! I know your mom is going to be very busy, but I'm sure she'll find some time to take a picture of that cute face of yours!

Hi Millie. You don't need a reason to post pictures of yourself...it's always nice to see your gorgeous being!

Hey, Millie! Thanks for this bright spot in my day.

I think I'm coming over to grab a piece of that chicken!