This is the view on the other side of our house. This picture was taken last December. 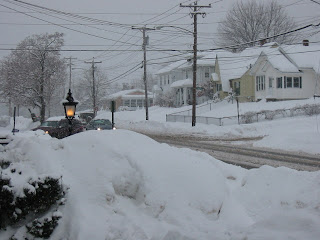 Last week, some beans dug some holes on our street, and planted big black sticks. What were these going to be for? 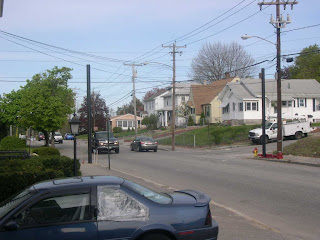 Mom wondered if it would be an arch like this one, way down at the other end of the street: 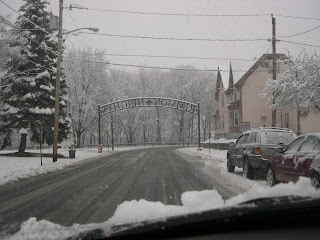 When she got home from her day hunting gig last night, she found this: 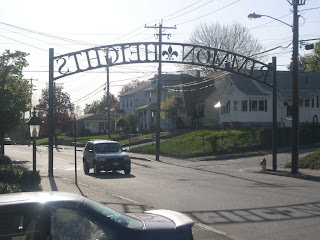 I watched the beans build it. I wasn't impressed. Mom wasn't sure if she liked it. 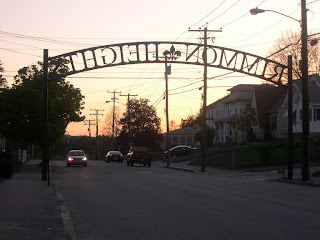 But as the sun went down, Mom changed her mind. Now she thinks it's kinda neat. We can see it from inside the house. It casts its shadow in the street.

There are other arches like this around the city. Some of them are lit up. We don't know yet if our arch will be lit up at night, too. We'll have to wait and see.

What Mom isn't keen about, is the name, "Rimmon Heights." She's never heard of this neighborhood referred to that way in her entire life. She said somebody called Polly Tishan must have decided to name it. She doesn't seem to like this Polly very much. Now, this area is the highest point in the city, so we get the "Heights" part, and "Rock Rimmon" is a big landmark around here, so that's probably where that came from. She thinks it's kinda weird.

I guess she'll just have to get used to it.
Posted by Millie at 6:00 AM

Oh I thought you were gettin a really big volleyball net on your street, not a silly sign. Does the folks near you have trouble reading the smaller street signs?

I think it's kind of cool. Lights would be nice on it!

that's a pretty cool arch - maybe they put it there so that everyone in the area would know where they lived.

The arch is interesting, adds something different. I agree, I'm not sure about the name - a lot of neighborhoods get "new names" to help drive real estate - that happens here to some of the less popular neighborhoods.

Hmmmmmm. Interesting. But how do they read it backwards?

I think it looks pretty!

I think it looks very nice. However, I think Polly should have asked the residences if that was name they liked. :)

That arch does look rather cool!

It's cool that you has a sign, but it is kinda funny that they made up a name. Polly Tishin can be silly sometimes.