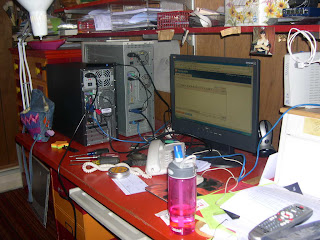 Mom -finally- did it. She finally got herself a new computer. She's only been trying to get a new one for about a year now. The new one is the little one on the left. She has a kayvee-ahem switch so she can have the two computers on using one monitor and keyboard, and mouse. She's copying files from her old computer to a portable 300 Gig hard drive, then onto the new one.

She is a very good customer, and she knows she will be taken care of. But she says it's very annoying because until she can use the right video card, the pictures all look s-t-r-e-t-c-h-e-d out. And that makes her a little crazy.

Frankly, I think she's a little crazy to begin with.

Mom's got quilts designed for Lilly Lu, Mu Shue & Iris and she'll be sewing them this weekend (if she can pry herself away from the new computer). When she's done those (and two others also in the works) she is gonna concentrate on her Super-Duper Secret Project that she won't tell anybody anything about.

She said I would never get ANY treats or ANY 'Nip for -The Rest of My Life- if I spilled the beans, so you guys aren't getting any clues from ME!

At first I thought this was a Terrible Thing. But then it dawned on me -- if she can't tell anybody about her Super Secret Project -- then she won't be hijacking my blog! I can have it ALL to MYSELF!

Labels: computers all over again, fanatics

Mommy got all dizzy looking at that picture of your computers. She is not too bright with them.
Millie, you are wise not to spill the beans. A life without treats or 'nip? Now that would be awful!

good point Millie, you get your bloggie all to yourself!

Always look on the bright side of life. We also think you should definitely not tell anyone because living the rest of your life without treats or nip? (gulp) That would be awful!!

I'm all curious about this super secret project . . . I wonder what it could be?

Congratulations to your mom on her new computer! We hope the video card issue is quickly solved!

We hope your mom gets her video card slot problem fixed soon. Our Uncle M is the one who is our computer guru. Don't spill the beans because life without treats is no fun.

Cody says he agrees with you about closed doors and the PTU -he doesn't like closed spaces at all - he doesn't even like being cornered in a room.

We are curious but don't spill da beans cuz life wifout nip or treats is barely any life at all...